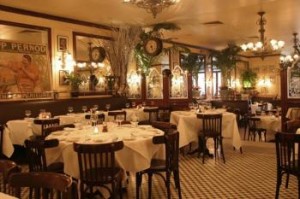 I don’t usually like to make a big deal of my birthday but of course I am always down to celebrate for any halfway decent reason. This year my birthday fell on a Monday but I was fortunate enough to be taken out for a surprise dinner. Being half French I was extremely excited not only to have some of my favorite traditional dishes but mostly to see my favorite and rarely seen dish, quenelles, on the menu at L’Absinthe. I don’t think this was an accident.

The restaurant itself transports you directly to Paris, maybe a side street in the 6th near Les Deux Magots, with its warm lighting and leather booths. The walls are covered in posters of famous nouveau artists and potted palm plants bring a little bit of the outdoors inside.

Since opening in 1995, L’Absinthe has remained a favorite of many an Upper-East-Sider. The menu includes everything you would expect to see on a traditional bistro menu and the chef has mastered the flavors of Parisian cuisine. Chef Jean-Michel Bergougnoux who hails from the likes of London’s Connaught and New York’s Lutece was recently named Chef of the Year by the Maitre Cuisiners de France.

When I first sat down and excitedly scanned the menu I saw some surprising items that I have rarely seen outside of France proper.
The first thing that caught my eye was the periwinkles. The last time I had periwinkles I was sitting at a beachside café in the South of France with my Grandmother and Greatgrandmother – must order. They arrived to the table in a pile on crushed ice with some mayonnaise, cocktail sauce and lemon juice. I was a little nervous that they would be fishy and slimy without the mask of butter and garlicky pesto that typically distracts from the fact that you are eating a glorified slug. However, the little guys had more of a texture of a creamy kumamoto oyster than anything and dipped in a little mayo really were a tasty little nibble. 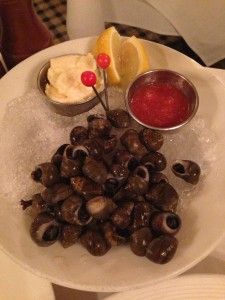 Another one of my favorite dishes is boudin noir, or blood sausage. It is traditionally served with roasted apple and this one also came with a bit of finely diced carmelized onion and a silky mashed potato which was a perfect combination – a little bite with sweet and a little bite with savory. The sausage itself has a deeply rich flavor and is absolutely delicious but a slightly acquired taste. We ordered a salad to have something green on the table as well which was perfectly fresh and just fine. 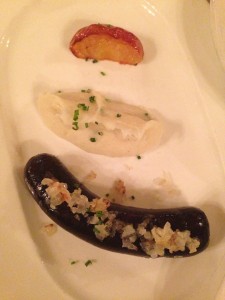 The main course was what I was really looking forward to. Quenelles are one of my absolute favorite things and this was pretty much the sole reason why we were dining here. The perfectly formed little seafood souffles were bathed in a creamy, frothy lobster bisque and were topped with a whole lobster tail, a chestnut for texture and a quarter moon shaped crispy puff pastry. Just perfection. This dish requires a fork, a knife and especially a spoon. 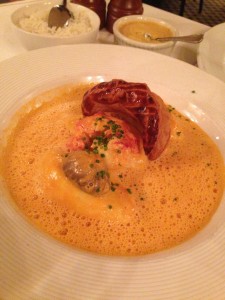 Our other entrée of rabbit leg was also very good but I mostly focused on the one I just described. It was served atop some roasted vegetables with a black olive tapenade type sauce. We also had a side of wild mushrooms which were great. 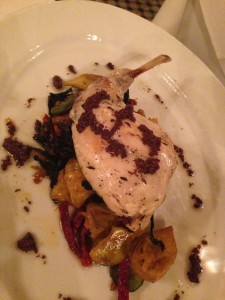 Of course no birthday dinner at any real French restaurant would be complete without a delicious confection, but more specifically, a dessert souffle. We ordered both a Grand Marnier and a chocolate version both of which eagerly rose over their their little ramekins awaiting a generous drizzle of crème anglaise.  A delicious end to a delicious and rich meal – perfectly suited for a memorable birthday. 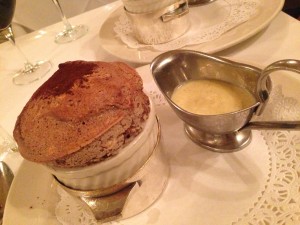 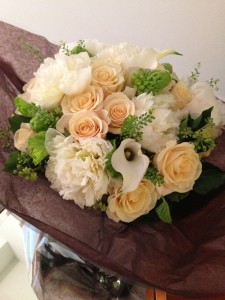 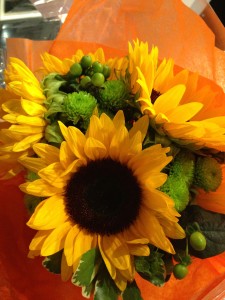