Gabe Stulman’s newest creation is going to be tough to get into real soon.  Stulman is 3 for 3 in opening exceptionally popular spots in the past ~ year (Perla, Chez Sardine and Montmartre), and rightly so. All of these restaurants are charming with delicious food. Montmartre is located in Chelsea in an area that is somewhat of a no-man’s land of good food.  Chef Tien Ho, formerly of Má Pêche, presents an interesting menu of traditional French ingredients presented in completely new ways. The space is typically French in that it is [very, very] cozy with just a few small tables in the back half and a small bar with about 8 stools up front. This makes it easy to eavesdrop or reach onto your neighbor’s table and steal a spare pomme soufflé when they are not looking.

My friend and I decided to wander in one Friday night for a late casual dinner. 40 minutes later after a few “Mifflin street Moonlight’s” we were escorted to our tiny table.

Everything on the menu looked delicious. We started off relatively sensibly and then just drove straight off the deep end and went into carbo-overload for our mains. We simply could not decide between two of the sides. So we ordered both. I’ve never been one for moderation.

An amuse bouche is always a nice way to welcome diners in a restaurant. We had a little nibble of a mushroom crêpe with chives that definitely made us hungrier than we already were. 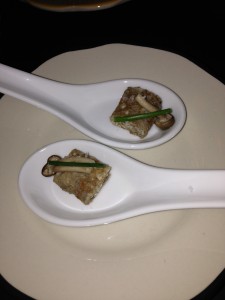 We began with the frisée aux lardons salad with a fried egg and duck confit on top. The salad was crisp and nicely dressed, the duck confit was flavorful and the egg just runny without being undercooked. The best part were the croutons which were crunchy and absorbed some of the tang of the sherry vinegar. 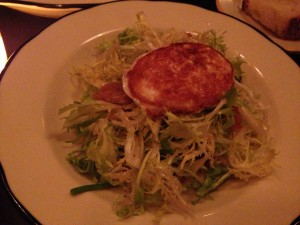 We also had the hamachi with marinated apples, chili and kaffir. This was also very good but the chili did not have as much of a kick as I would have expected. The fish was also a bit too warmed which means it probably sat out for a little too long before making it to the table. 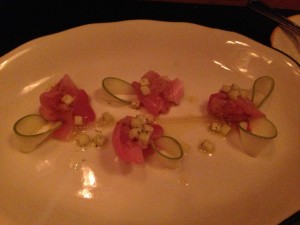 We ordered one entrée to share which was the lamb testaroli. This dish is what made our meal. Chunks of lamb tenderloin grilled rare on top of a buckwheat crêpe -pasta mixed with a tender lamb neck ragout, niçoise olives and dressed with a buttery gremolata. I am not sure there is much else to say here except that each bite resulted in an exclamation of how delicious it was. 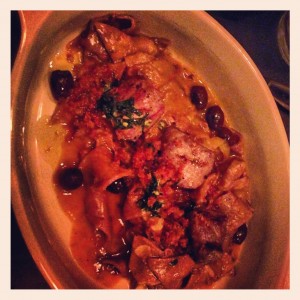 To lighten things up a bit we ordered not one, but two sides of potatoes. The first was the pommes soufflé which are basically hot versions of the puffy potato chips you always dig around for in the bag. These little airbags were stacked like a log cabin on top of one another and served with a rich dipping sauce of artichoke and chervil. 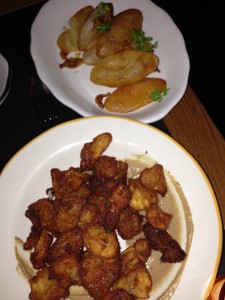 The second potato dish was so large it could have easily been its own entrée. Potatoes “Gascognaise” were crispy fried chunks of potato with a thick sauce of fois gras and carmelized onions. I think this one is pretty self explanatory too.

If you are looking for a casual date spot or just a good meal with a friend, Montmartre will certainly do the trick.