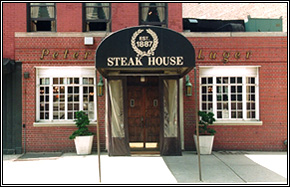 When it comes to burgers, one of Brooklyn’s best kept secrets, which is actually no longer a secret at all, is Peter Luger’s burger. Served only before 3:00pm in the afternoon, this juicy half pound of heaven on a bun takes a bit of planning to acquire. First, you need to get a reservation at the appropriate time – call in advance. Second, be on time – the Maitre D’ does not appreciate tardiness. Third, prepare yourself by eating only a light breakfast so as to ensure maximum hunger around lunchtime. Fourth, clear your schedule for the rest of the day because you will likely be immobilized for the majority of the day from having consumed so much beef, potato, bacon and perhaps a vegetable. It’s almost like Thanksgiving but with USDA Prime beef.

The restaurant has been around originally since 1887 but after Peter Luger died in 1941 the restaurant was sold to the Forman family and reopened in 1950. Since then Luger’s is renowned for having perfected the art of beef preparation. The family has passed down the secret recipe for dry aging their premium cuts of beef – a role which has actually been taken on by the ladies of the family who select the meat that is used and then ensure that it is aged to perfection. It is all prepared on location in the specially built dry aging room.

On a chilly Saturday a couple weeks ago I decided to go see for myself how the burger stacks up in the realm of New York burgers. We knew what to order as soon as we sat down- two burgers: medium rare with cheese, thick cut bacon, a Caesar salad and German potatoes.

Besides steak and burgers Luger’s also does a thick cut bacon extremely well. Basically one slice is considered an appetizer. Although Luger’s has their own special “Steak sauce” they prefer if you only use it on the bacon and as a tomato salad dressing. The sauce is a delicious cross between cocktail and steak sauce and does taste quite good on the sizzling bacon. I ate some of it without the sauce though because it was a little overpowering. 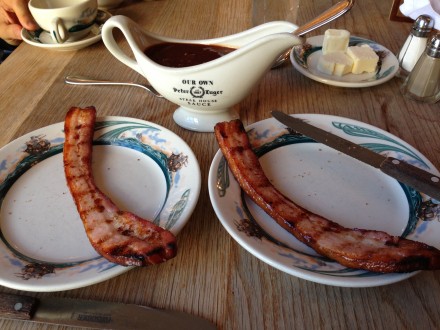 The salad was perfectly tasty and fresh and the dressing was nice but it is basically just a Caesar salad. 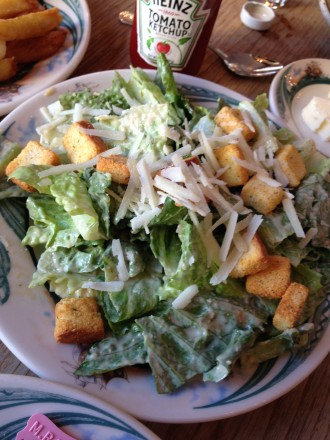 The German potatoes were disappointing and tasted more like bread-ey stuffing than potatoes. Ours also came over-broiled on top so they were more burned than golden brown. Not impressed. 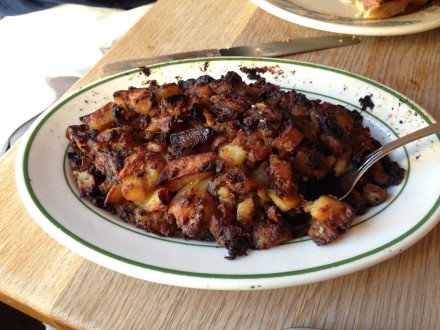 Now down to the burger. This is probably the most back to basics burger out there. They give you two choices – cheese or no cheese and how would you like it cooked? The meat is seasoned to perfection so that it does not need anything else. The bun is fluffy and somehow traps all of the juices that ooze out of the patty without getting the least bit soggy. I am also a stickler for the meat-to-bun ratio. In this case the meat was exactly the same size as the bun, which made me very happy. Personally, I thought this was the best straight up burger I have had.

Burger with 2 Slices of Cheese 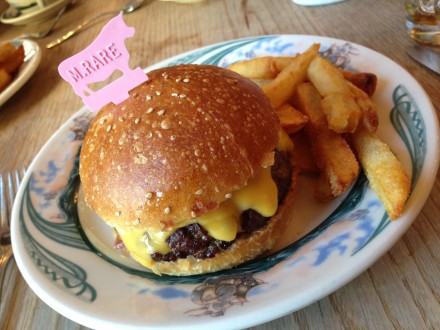 Time for your close up 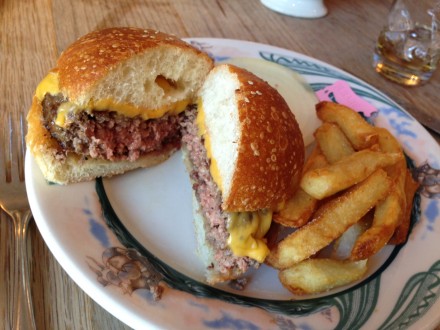 Come to Luger’s to focus on the meat. They know how to do a burger exceptionally well and of course their steaks are pretty special as well (that review is for another day). I am adding it to my EPIC Picks list because of the burger. The bacon is really the only other item worth the calories – save the sides for elsewhere.