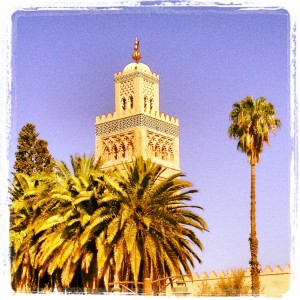 We were met in Marrakech with a sweltering dry heat that was bearable until the instant that skin touched skin when you would break out into a sweat. After the first two days it cooled to a more pleasant temperature of a mere 105 degrees farenheit. We immediately understood why tourist season begins in mid-september.

After driving a few hours, though it seemed like days, out of the endless sea of sand arose a magical oasis which was the Medina of Marrakech.

What is immediately apparent about Marrakech is that it is a walled city. But it is not just the outer walls of the medina but rather inside those walls are thousands of tiny clay and stone lined streets that block outsiders from seeing behind them. It is these walls that hide all the secrets of Marrakech. Our guide was fantastic (Mustafa from the Mamounia) and with his guidance we were able to access many so many things that you simply would not know to look for. A secret bazaar of antique furniture and wares, a local bakery where all the townspeople bring their bread dough to be baked in a giant oven and long staircase at the bottom of which a man tended a coal fire which served to heat the surrounding Hammams (the structure for the Moroccan bathing ritual).

The city is full of boutique hotels ranging from 4 to 20 rooms called riads. Many of the riads are converted townhouses of wealthy families which now are mini oases hiding behind unassuming doors in the rustic city. Villa des Orangers is a charming and gorgeous little riad with just 19 rooms located in the Medina. It is truly a miniature paradise. Between the overall beauty of the space and the impeccable service, it is easy to see how this little gem has earned the prestigious title of becoming a Relais & Châteaux hotel.

We sat down in the quiet garden for our first meal in Morocco.To start I had the duck carpaccio with green beans. The duck was lightly cured and the green beans were tender in a balsamic reduction. (Unfortunately my photo didn’t totally make it) 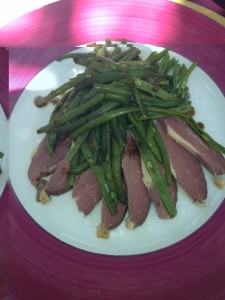 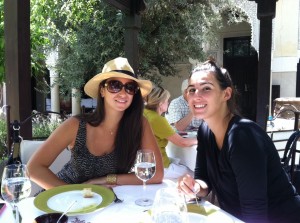 Next I had a salad with white anchovies and other vegetables. This was perfectly light and refreshing in the heat. 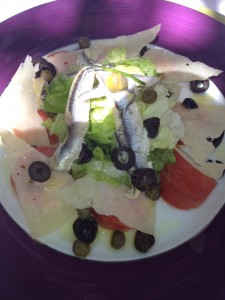 Another option which proved to pop up on menus everywhere was the club sandwich. Served with egg, this was a delicious play on the classic sandwich. 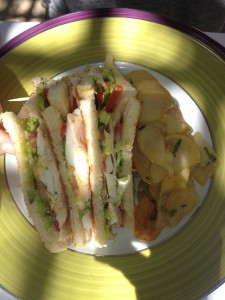 We finished off with a decadent dessert. It is vacation after all. Morocco has a large amount of fig trees so we knew they would be fresh.  The ripe figs were almost carmelized in their own sugars and were served with a sweet vanilla bean custard in a meringue cup. 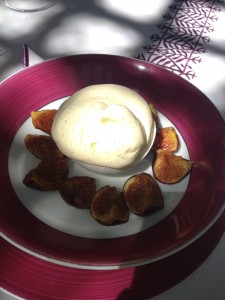 Although we were staying in the riad, we ventured outside for all of our dinners. However, the Villa des Orangers is a wonderful place to have a very romatic dinner by the pool. Each night the hotel sets up about 10 tables for diners to enjoy the scenery. I would highly recommend visiting Villa des Orangers for lunch or dinner on your trip to Morocco. 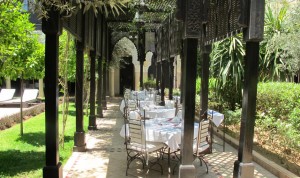 If you cannot make it for a full meal, there is always the option of having a cocktail by the pool where they will serve you a refreshing beverage along with some small hors hors d’oeuvres and spiced nuts to nibble. 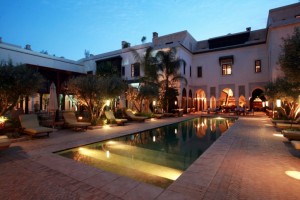 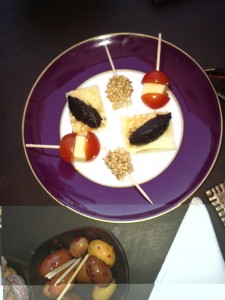