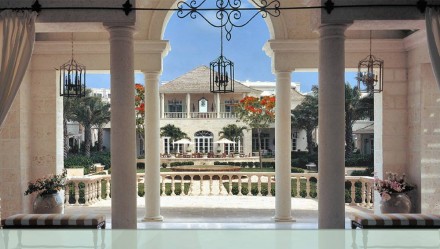 The Regent Palms is another beautiful hotel in Providenciales which features a slightly fancier restaurant, Parallel 23. The Palms has a grand and beautiful entrance and the restaurant is situated on an open terrace on the opposite side. The hotel is extremely elegant – all white with pristine landscaping that is romantically lit in the evening. 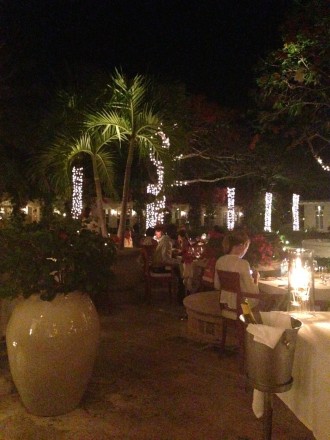 We sat down to a quiet dinner on the side terrace and were greeted with a lovely amuse bouche of fruity quinoa in a tumbler made of bamboo. 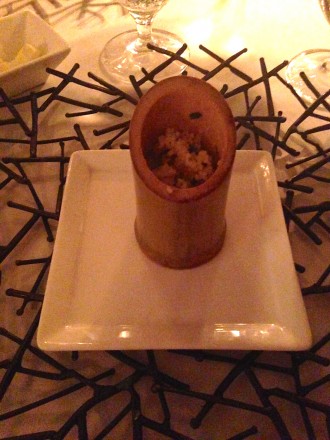 Still on a mission to try as many preparations of conch as possible, I ordered the conch three ways. This time the preparations included flavors from around the world. The first was a spring roll filled with conch, lemongrass, ginger and green onion with a citrus ponzu dipping sauce. The second was a ceviche with grapefruit, lychee, mango, and candied jalapeno topped with a lotus root chip. Finally, a Malaysian coconut curried pumpkin soup with toasted coconut and a conch fritter. Each one tasted better than the last!

In an effort to incorporate some vegetables, we also had a salad with thinly sliced smoked duck, goat cheese dressing, dried cranberries, sweet potato chips and onion marmalade. While perhaps not the most Caribbean dish, this was also very good. 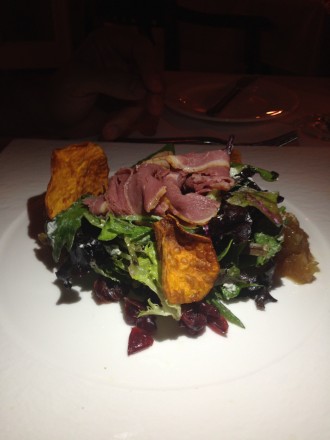 We had a third appetizer – ahi tuna tartare with miso soy marmalade, cucumber and radish salad and pickled ginger dressing. Again, the fish was incredibly fresh and the Japanese preparation is always a winning combination of flavors.

We were then given a palate cleansing guava sorbet which was also very refreshing in the Caribean heat.

On to the entrées – you guessed it, more fish!

The first was a Caicos grouper caught that day, served with brown butter sweet corn and fennel succotash, sautéed bok choy, saffron Pernod sauce and tomato confit. The flaky fish fell apart at the touch of the fork. 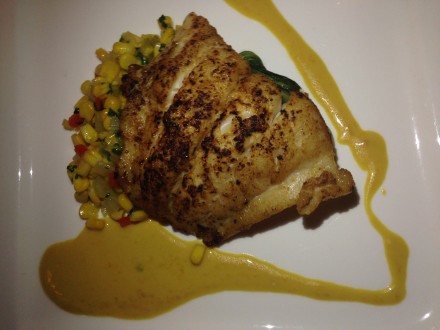 I chose another Mahi Mahi dish with more of an Italian preparation. The Mahi was marinated in herbs and then crusted in black olives, capers and sundried tomato, served with roasted new potatoes and Puttanesca sauce. The salty accoutrement worked perfectly with the dense fish.

After so much food we settled on some homemade ice cream for dessert – dulce de leche and banana.

If you are looking for a more upscale setting to dress up on your vacation, Parallel 23 is the perfect ambiance that offers a more diverse menu. 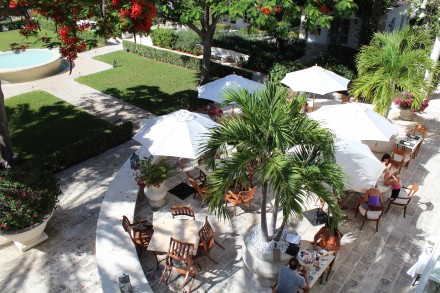