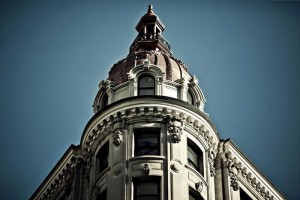 The Nomad is my current restaurant obsession. It is the first place that rolls of my tongue when people ask me for recommendations. I used to live around 29th street and 5th which was a complete dead zone culturally until the Ace Hotel opened up and started a trend in the surrounding blocks. In the past few years several great restaurants and some nightlife has begun to pop up throughout the area. The Nomad Hotel (whose proprietors also own and operate the Ace) then opened early this summer by the same team of Eleven Madison which means that quality of food and service are the priorities.

The restaurant space itself is a sequence of rooms each decorated a bit differently. There is the library room, the fireplace room, the bar room and each evokes a bit of Gatsby, a bit of rock-n-roll and maybe even a touch of a modern Mckittrick Hotel. The dark decor and heavy furniture make the space feel more private while the high ceilings give it a feeling of grandness. 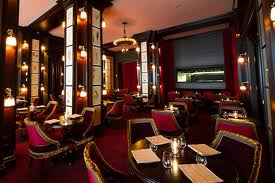 The New York Times review said that the food at The Nomad is a more accessible version of the food at Eleven Madison and I completely agree. The quality of the ingredients is comparable but the food is bit more rustic than the meticulously plated [sometimes molecular] gastronomy served at its sister restaurant which Daniel Humm and his partners purchased from restaurateur Danny Meyer last year.

A friend and I decided to check out the new Nomad together as our plotting and planning dinner before going away on a trip.

One of the trends that has been popping up around the city is being served a more interesting bread than your typically bread basket. Although I love the new creative varieties, it definitely makes it harder to resist those carbs. We were served a beautiful loaf of fresh-from-the-oven rustic bread adorned with rings of bright green zucchini. 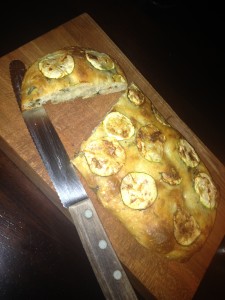 As our appetizers we decided to share a few starting with the stunning crudites which is a beautiful medley of colorful vegetables arranged poking out a ring of crushed ice with a bright chive cream for dipping. 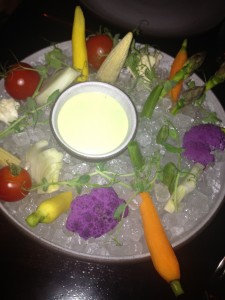 Next was a crisp chiffonade of snow peas with pancetta, pecorino and mint. This was a very nice preparation and a very different kind of salad. 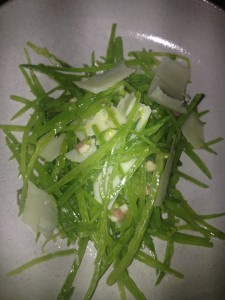 We also had the beef tartare which is served in a small glass mason jar with cornichons and horseradish. This was perfectly portioned for two and was nicely seasoned with the addition of a little cornichon. 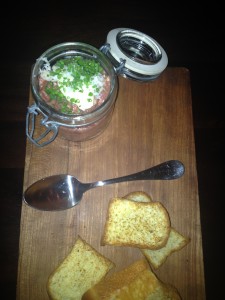 As our entrees we ordered the suckling pig and a lighter fish to balance it out. The pig is confit with a very crispy skin on top and on that evening they chose ripe red cherries as the complementary fruit as well as pickled mustard seeds, onions and some greens. The meat was incredibly tender and bursting with flavor without too much fat. This was another ideal dish for sharing as it is still pretty rich for just one person although you may or may not want to share after taking one bite. 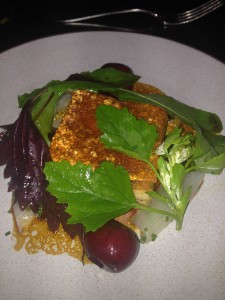 The black bass was by far the best cooked fish dish I have had in a while. The bass was perfectly cooked to a flakey medium rare. The shallots were crispy and added texture to the otherwise tender ingredients – mint, zucchini and greens. This is a must order as well. 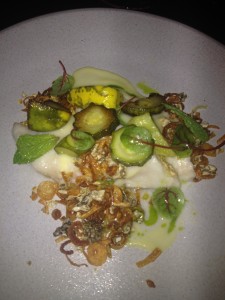 Mark Welker the pastry chef stunned us with his “Milk-n-Honey” dessert which is basically a milk flavored ice cream with crispy honey sponge-brittle crumbled over the top. This is a surprisingly delicious and creative dessert using really only two main ingredients. The little quenelles of ice cream are also very cutely decorated in stripes almost like little bumble bees. 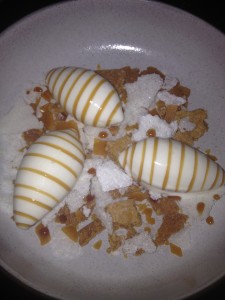 I think that this was a pretty good representation of some of the great dishes at the Nomad. Although, among a few others I still need to try the heralded roast chicken for two which makes a perfect excuse to return very soon. The Nomad also has a rooftop which I was unable to explore this summer but I am anxiously awaiting the nice weather to dine outdoors or have a cocktail there as well. 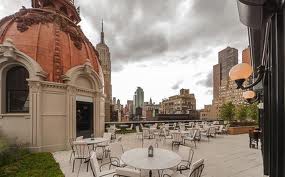