The Bazaar is ranked 85th on the San Pellegrino World’s 100 Best Restaurants list (2011) so I definitely consider myself lucky to have dined there. Acclaimed chef José Andrés (chef/owner ThinkFoodGroup) also has restaurants in Washington D.C. and Las Vegas and was named “Outstanding Chef” by the James Beard Foundation in 2011.

The Bazaar is located is the SLS Hotel in Los Angeles. The scene is bustling and energetic and the sprawling space is very modern mixed with rustic wooden furniture which compliments the cuisine which contrasts avant-garde and traditional spanish cooking. It is divided into sections and diners are invited to move around between them. Dinner is served in one section (Rojo y Blanca) where there is an open kitchen. The bar (Bar Centro) is located in the center  with dessert served in another area (Patisserie) that is a whimsical interpretation of a European bakery decorated with colorful confections.

The menu at Rojo y Blanca is comprised of small plates that are meant to be shared. We decided to let the kitchen select the dishes that would be most representative of the restaurant so each course was a little surprise. We enjoyed a beautiful, full-bodied Spanish Rioja that balanced the bold and colorful flavors of our meal.

We began with the Olives Modern and Traditional which was the perfect juxtaposition of old and new ways of thinking about food. Each of the modern bites was a jiggly burst of salty olive-ness that was almost like eating a dirty martini. Interestingly, I found these to be actually less salty than the traditional olives which required a sip of water after each one. 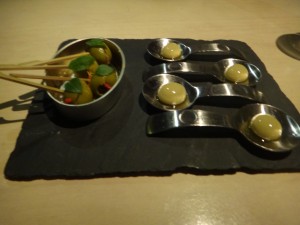 Our second course was a Fermin Platter which was a tasting of all three of the Jamones the restaurant offers. First the Jamón Serrano Fermin which is a dry cured ham. Second is a Jamón Ibérico Fermin which is a dry cured, free-range Ibérico ham and last is my favorite Jamón Ibérico de bellota Fermin which is an acorn-fed, free-range Ibérico ham. The meats were served with Catalan style toasted bread with warm tomato spread across the top. Its amazing how something so simple can be so flavorful. 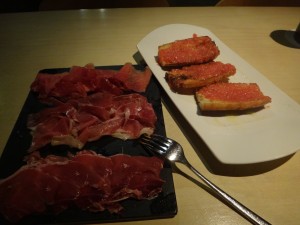 The next dish was a little mound of sizzling sautéed shrimp with garlic and guindilla pepper making it fairly spicy. 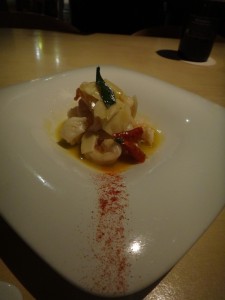 The next dish was another example of Andrés’ creativity in the kitchen. This reinterpretation of the traditional Caprésé included all of the expected ingredients but the surprise here were the little pockets of liquid mozzarella. The components were small enough to have one of each on the fork forming the ideal bite- sweet tomato and basil pesto, creamy mozarella and a little crunch from the airy crouton. 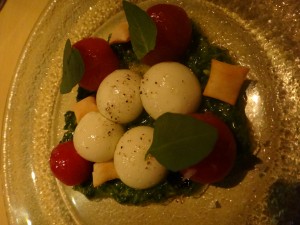 The Tuna Ceviche and Avocado Roll with jicama, micro cilantro and coconut dressing was like a spanish version of your typical Japanese sushi roll. 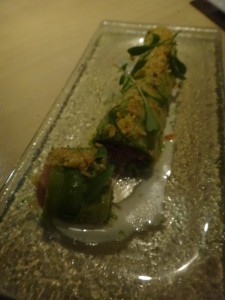 Next we had the Croquetas de pollo which were chicken béchamel fritters that were crispy on the outside and rich and creamy from the  béchamel sauce on the inside. 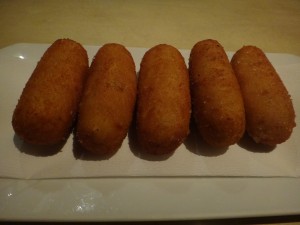 Next arrived a beautifully composed dish of Lemon Artichokes with Black olive tapenade and dandelion micro greens. While the artichokes were tasty, the amount of olive tapenade combined with capers made this another very salty dish that we couldn’t actually finish. 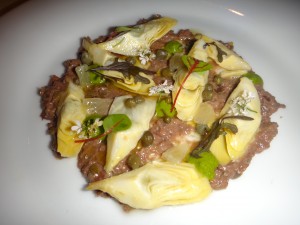 Some relief from the salt came with little purses of Jicama Wrapped Guacamolé with Micro cilantro and bits of corn chips. 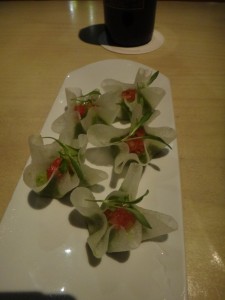 My favorite dish of the meal was the “Philly cheesesteak” that was made out of an Air bread filled with creamy cheddar sauce and topped with rich, tender slices of Wagyu beef. 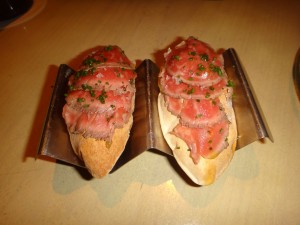 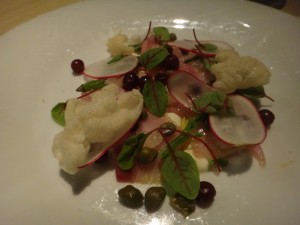 Our final dish was a Japanese Taco filled with grilled eel, shiso, cucumber, wasabi, and chicharron. A light refreshing way to end the adventurous and indulging meal.