I don’t often venture very far outside of the city, or even very far above 14th street for that matter, but dinner at Taverna Kyclades was well worth the adventure. A friend of mine who just so happens to be Greek and very proud of his heritage made it his mission to introduce a large group of his friends to some of the best Greek food available in New York. Astoria has a huge Greek population so there is no shortage of Greek restaurants, but this Taverna is supposedly the best and most authentic “Psaro-taverna” which basically means seafood grill.

After work one Thursday evening I hesitantly boarded the subway and made my way to the last stop in Queens. Before I knew it I was being greeted by a rowdy crew and had a glass of wine in hand in the entrance of the restaurant. Thanks to our gracious host I did not even see a menu at any point during the meal and received detailed explanations of everything that we were served. All the dishes were served family style and I learned that lemon must be spritzed on EVERYTHING.

We began, of course, with a Greek salad of beautifully ripe tomatoes, salty feta, olives and cucumbers. 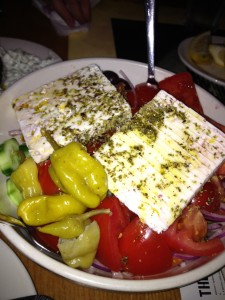 To accompany the salad we had a trio of dips with warm grilled pita-  Skordalia (garlic), tzatziki (yogurt with cucumber), and taramosalata which was by far the best I have ever had. I made sure it stayed close to me throughout the entire meal.

In addition to our carafes of wine we had no shortage of Ouzo which is an anise-flavored aperitif and oddly turns white when poured over ice. This was certainly the making of a traditional Greek meal. 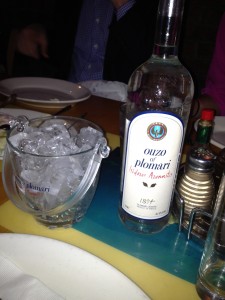 We also had a dish that I have never had before which I would say is basically like a fancy mozzarella stick.  A big slab of tangy fried cheese doused with lemon. Can’t really go wrong there. 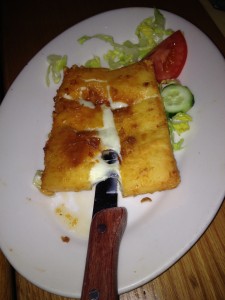 Next came the plates of grilled sardines and sausages. The sardines were my favorite fish of the meal. Tender whole fish with crispy skin and meat that fell off the bone. The lamb sausages (Loukanikou) were split in half and grilled as well and had a deliciously salty bite. 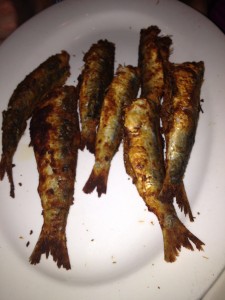 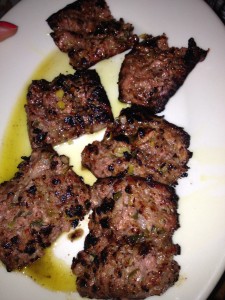 The meal kept going with more fishes and meats and vegetables. I actually missed taking a few pictures (calamari for one) and got in late in the game for some of the other pictures (octopus, lamb chops).  Out came the chops which I found to be slightly overcooked. I think fish is more their specialty. 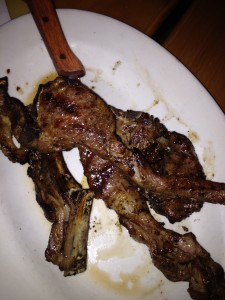 The branzino was tender and delicious dressed with lemon and a drizzle of good olive oil.

The octopus had a great flavor and was very tender. This picture clearly does not do the dish justice. 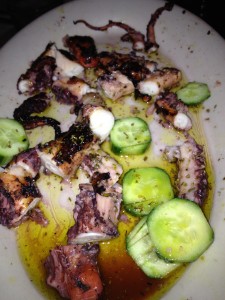 The mains were complemented by sides of roasted lemon potatoes and steamed dandelion greens. Both dishes were simple and flavorful. 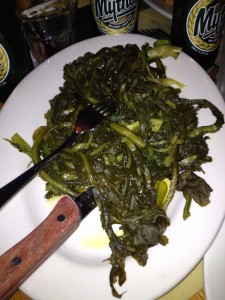 It would not be a true Greek family feast without some sort of dessert. Our last dish was a traditional custard-pie called Galaktoboureko. This simple sweet custard was topped with just a bit of cinnamon and was the perfect texture and flavor to end the meal on. 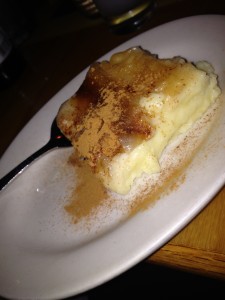 If you are looking for authentic Greek food at a reasonable price and enjoy a bit of an excursion, Taverna Kyclades is the perfect destination for a spring field trip.