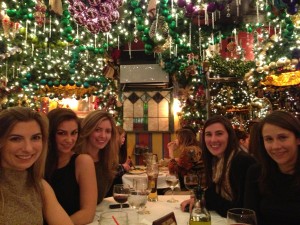 The Girls Getting Festive at Rolf's

Whether or not you are in the Christmas spirit going in, you will leave Rolf’s German restaurant feeling something like Will Ferrell’s character from the movie “Elf”. During the holidays Rolf’s puts up enough decorations to create and ambiance of cozy holiday claustrophobia and make you really wonder what kind of expenses they pay for storage during the off season.

Rolf’s has been celebrating Christmas (and Oktoberfest) for over 40 years. When you walk in you are immediately greeted by not only the décor but also a crowd of people who are dying to sit down and get their holiday spirit on. With beverages such as mulled wine and white russians being served at the bar one is easily swayed into waiting for a table.

On this particular night right after Thanksgiving I got lucky and was able to get a reservation for 5 at a reasonable time. We all sat down with our warm beverages and ordered our own appetizers and then a bunch of things to share for our mains. There is almost nothing on the menu that is even remotely healthy so  just go for it.

We started with a few orders of latkes. Mistake #1. Each potato pancake could have fed the entire von Trapp family and this plate came with three. These were pretty dense pancakes and the breaded potato holds together on the fork making it a nice little vehicle for sour cream and fresh apple sauce. 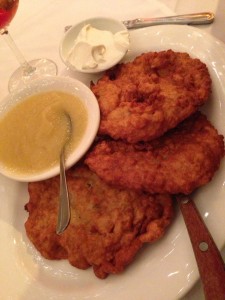 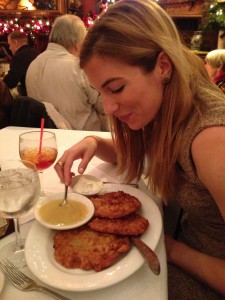 Pancakes the size of your head

I opted for something that seemed slightly lighter which was the German apple crepe. This was similar to your traditional French crepe with cinnamon and Julienned apples. 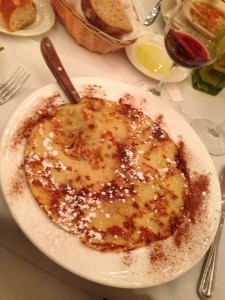 For our main courses we ordered several things to share. First we ordered the sausage platter which gave us a nice variety of sausages: Weisswurst (veal sausage), Knackwurst (beef sausage), Bratwurst (pork sausage), and Smoked Bratwurst which were all served with mashed potatoes and sauerkraut. Everyone got a little taste of each plump juicy link.

We also had the wiener schnitzel with herbed spätzle. This was a pretty traditional schnitzel but not the best I have ever had. It had a very corn mealy tasting breading which is not my preferred type of breading. The spätzle tasted good but was a little bit doughy. 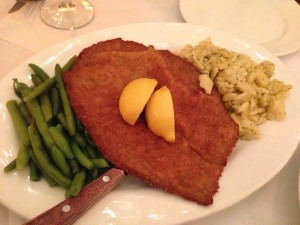 The Golden Roast Goose was my favorite dish. The skin was crisp and the meat was rich and tender. Goose is almost like a mix between chicken and duck, it is not quite as similar to red meat as duck but still has the gamey deep flavor.  This came with mashed potatoes that brought back memories of the cafeteria as well as a relish of red cabbage with cranberry. 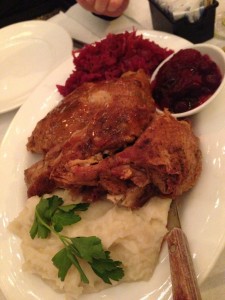 Rolf’s German Restaurant is the perfect place to go to put you in the Christmas spirit! 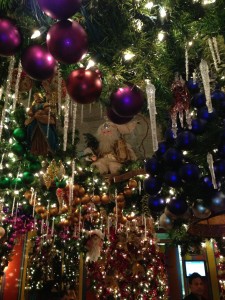