Carbone was at the very top of my list of places that I absolutely must eat at this summer. Check. Worth it? Absolutely.

Even months after opening Carbone remains near impossible to get in and I had to pull a serious favor to get a table. But once you’re in, it’s glorious. Most of the tables are set for larger groups rather than 2-tops and they definitely try to encourage a certain energy. Carbone is meant to be a play on the old school Italian style of cooking and dining but everything from the music, to the ambiance, to the upbeat attitude of diners and servers alike ooze New York City.

Instead of “waiters” Carbone has “captains” which are far more sophisticated. Our captain just happened to be an amazing women who not only looked like a seriously badass Bond girl (yes, you Andrea) but she also managed to convince a neighboring table of boisterous real estate execs to send us a really nice bottle of Brunello (or two). Now that’s a woman to have in your court!

As soon as we were seated (shockingly 5 minutes BEFORE our actual reservation) we were greeted by a man wielding an entire wheel of cheese. With a little knife he placed a chunk of salty cheese onto each of our bread plates. The table is also set with tender tomato focaccia and slices of cured Italian ham to eat with it. 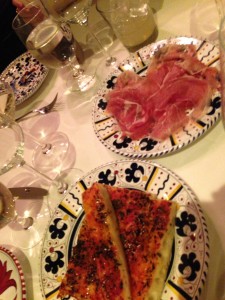 The menus arrive and they are so big that they serve as screens to momentarily shield one from their neighbors as they carefully decide on their plan of attack. Although it is not a huge menu in terms of options, everything on the menu is definitely huge.

We started with the raw seafood tower which was far more than I could have expected. This is not your average shucked seafood with a little cocktail sauce. Everything on the icy tower is seasoned with some sort of special sauce or delicately sliced and arranged on a little plate. Of course the most impressive was the giant spiny sea urchin holding court at the center which was served with some magical crunchy gremolata-like topping.

Next were the small plates and salads. Heirloom tomatoes were the special of the evening and our captain told us they were some of the best she had had. Obviously we deferred to her judgement and were not disappointed. The juicy colorful plate was topped with fresh pesto and came with a side of homemade mozzarella that needed to be cut into pieces with little mozzarella scissors. I didn’t even know they made those. 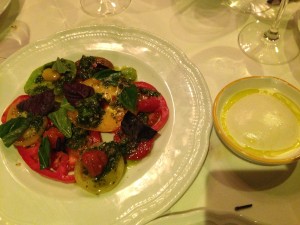 The grilled octopus was perfectly cooked and very tender. There seemed to be some sort of glaze which added a little sweetness. On top were some fresh tomatoes and vegetables and underneath was more of a jam of vegetables which included some peppers so I avoided it. 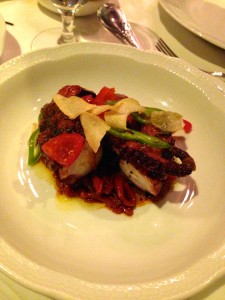 The caesar salad alla ZZ is made directly in front of you which in my experience generally means it will be pretty good unless they overdo it with the salt. Andrea nailed it. The salad was fresh and crisp with croutons that were big enough to be crispy on the outside but still soft on the inside – much like a personal mini garlic bread. 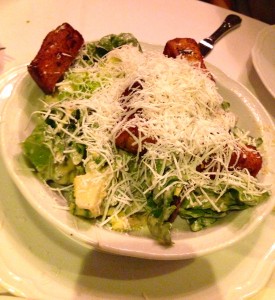 As with any real Italian meal, there is a pasta course. Since we were being healthy we limited ourselves to just 2 (just kidding). Linguine with clams seams to be everyone’s favorite so that was a natural choice. While I am not usually partial to the dish this one was pretty decent because the ratio of pasta to toppings seemed more balanced than usual to me. The spicy rigatoni alla vodka on the other hand was delicious. Just the right amount of spice and despite looking like there was barely any sauce the flavor was certainly there. 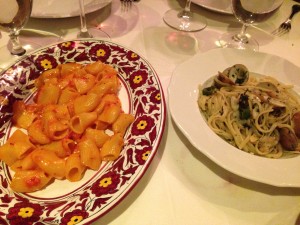 We were just about full at this point and not even halfway through the meal. Next came the double lamb chop which required an entire cart to be wheeled over in order to butcher it into a more manageable size. The meat was perfectly cooked borderline-rare with a little fat marbling through and charred on the outside.

One of the non-negotiables on the menu is the veal parmesan. This giant finely pounded and breaded veal chop arrives to the table and then is cut just like a pizza. This is not one of my typical orders at an Italian restaurant but the quality of the ingredients made this one damn good.

It didn’t stop there. For sides we ordered fried zucchini strings and “the corn” whatever that meant. little did we know but the corn arrived shaved off the cob, mixed with some seasonings and topped with a generous pile of shaved summer truffle. Not at all what I was expecting but definitely a nice surprise. The zucchini strings I found to be a bit too heavy on the batter and they would have been a bit better with a lighter version. Tasty nonetheless.

No one wanted dessert so we ordered 3. The cheesecake we were assured was the best we have ever tasted. It was in fact very light and delicious. 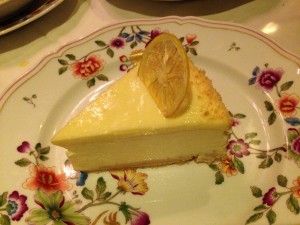 Given that it is summer and peaches are in season we had the peaches with a creamy zabaglione type sauce. 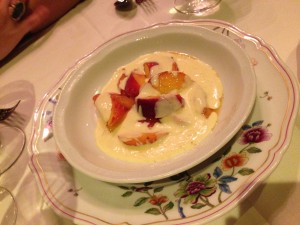 The carrot cake was also very good and arrived to the table like a shark fin topped with cream cheese frosting. It was light but not dry and didn’t fall apart when attacked by several forks.

Carbone is the type of restaurant that is best attended with a group. Order a bunch of these over-the-top decadent dishes and share everything with some delicious wine. You are bound to go home satistisfied, sleepy and stuffed like a little raviolo.

One response to “Carbone – NYC”