In my family we always celebrate birthdays with a nice meal somwhere in the city. For my dad’s birthday this year I chose Picholine for the occasion. Besides being known for their exquisite food, Picholine has to be one of the best values in all of Manhattan. For $145 you can enjoy a luxurious 8-course tasting menu (which ends up being more like 12) of creative and flavorful dishes. Chef Terrance Brennan has been creating his French inspired cuisine at his flagship restaurant since 1993 and after undergoing a revamp of the decor a few years back the decor is said to be vastly improved.

We went on a Monday night so the dining room was quiet but the service was friendly (although maybe a bit too friendly…at one point I thought our waiter might pull up a chair) and it did not at all have the feel of a stuffy old French restaurant. The portions in the tasting menu are nicely sized so that by the end of the meal you are satisfied but don’t feel like you are going to die at any moment which is often the case with large tasting menus. 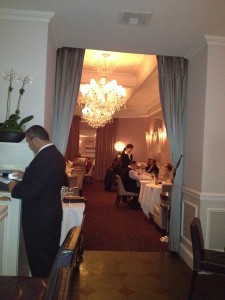 We were greeted with a selection of amuse bouches that included crispy salsify, a savory bon bon, gougère and a small dish of cauliflower panna cotta with a crispy caper. 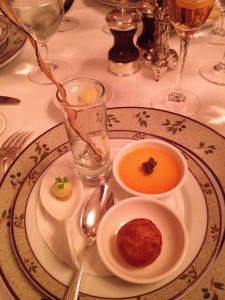 Poached quail egg with caviar: If I had a top 10 bites list this would be at the very head of that list. The crisp crepe-like exterior encased a perfectly poached egg topped with a hint of chive and a dollop of fresh salty caviar. Say no more.

The next bite was a combination of some of my other favorite flavors.  A spoonful of airy whipped potato topped with a generous slice of rich white truffle. Sadly, this was just one small bite. 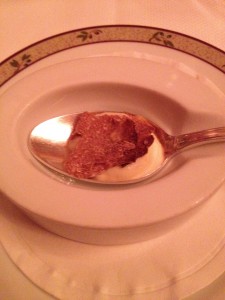 The menu continued to touch on my favorite things and uni was next- sea urchin panna cotta with “chilled ocean consommé” and caviar. The creamy panna cotta was seasoned by colorful seaweed and more caviar. The dish could be eaten accompanied by an airy rice crisp or simply enjoyed by the spoonful. 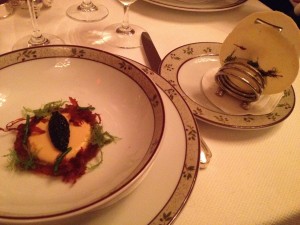 They gave a choice for the next course of fois gras prepared in a Japanese or French style. I chose the Japanese version which was was prepared “shabu shabu” style or warm in a sweet and sour bouillon. The soup was both light and rich and very delicate in flavor. 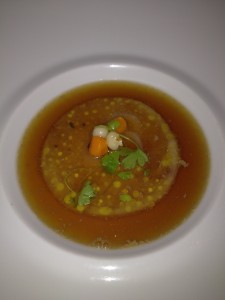 The other preparation was a fois gras torchon – the pâté was fresh and not over-cooked or over-cured but smooth and melt in your mouth.

Next I had a chestnut tagliatelle with wild game bolognaise. The nutty pasta was cooked al dente for some nice bite and coated in a rich meaty sauce with a few Brussels sprout leaves for color and finely shaved chestnut rather than parmesan cheese. 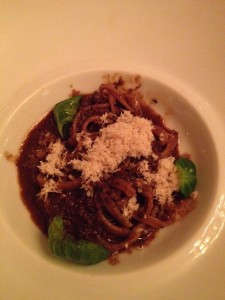 Next was a choice of various wild Scottish game which were each prepared differently. I had the hare prepared two ways which was incredibly tender and a light gamey flavor. The deep colored glaze was sweet and savory and went very nicely with both the sliced loin and the croquette. I was also lucky enough to find some stray shot (well, supposedly lucky) in the meat after being instructed to chew carefully so as to avoid any chipped teeth. 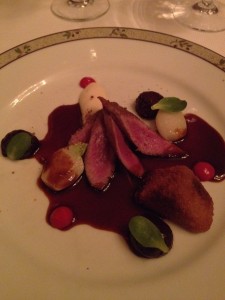 The next dish was very interesting – a selection of roquefort textures. This included a roquefort mousse, a carmelized meringue and sherbert with a side of sauternes geleé. Salty, creamy and, obviously, textured. 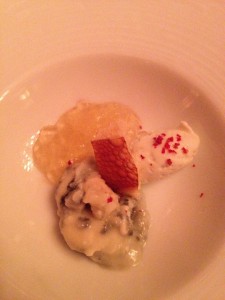 Another spoonful of molecular creativity served as the palate cleanser before dessert. A peanut butter and jelly bite that was made of peanut butter ganache and a concord grape cloud. Just like mom used to make…sort of. 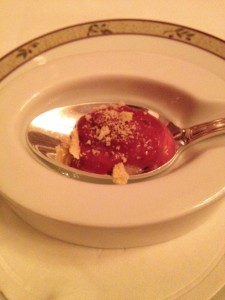 Finally, dessert. We all decided to have the chocolate sphere which was a small dome the size of a tennis ball brushed with gold powder. The waiter then poured a hot liquid chocolate over the top which melted the entire object revealing a pistachio and chocolate filling. 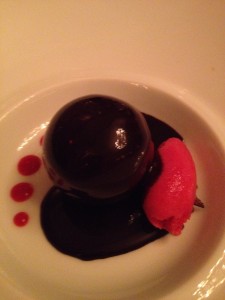 Picholine is a great restaurant for a special occasion or a place to meet for a pre-theater drink or meal.