We had one night at one of the most beautiful hotels I have ever been to, the Palais Namaskar. Namaskar opened just this past April and because the summer tends to be slow for tourism due to the heat in Morocco we were probably some of the earlier guests to stay there.

Namaskar is very grand with sprawling pools of water and gardens everywhere you look. Truly breathtaking at any time of day. It is located in the Palmerais which is basically out in the dessert. It is a great place to get out of the city, relax by the pool, do yoga in the garden, enjoy spa treatments and maybe even indulge in a camel ride.

We had lunch by the pool on the first day and everything was perfection. We each ordered a salad and then had two sandwiches to split.

I had the vegetable salad that was served on a bed of spiced, stewed and chilled tomatoes. The thoughtful arrangement of the garnishes made this the prettiest salad I have ever eaten. 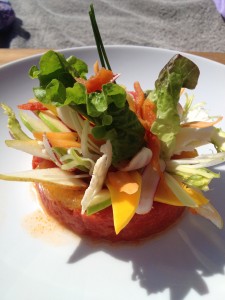 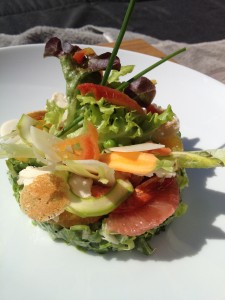 Caesar Version of the Salad

We ordered a club sandwich, which again was made with egg on tasted white bread.

We also had a ham sandwich with truffled cream cheese that was pressed and served warm with the crust removed. A very adult version of the ham and cheese your mother used to pack in your lunchbox. 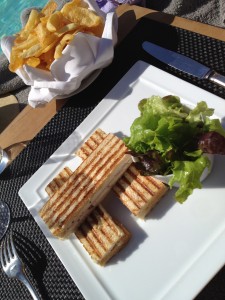 The sandwiches were served with potatoes that were a hybrid of a potato chip and a french fry in the way that they were cut. A nice poolside treat. 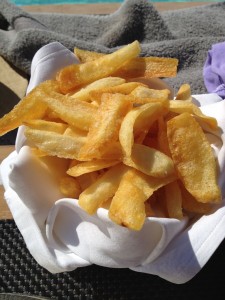 That and a glass of wine. Done. 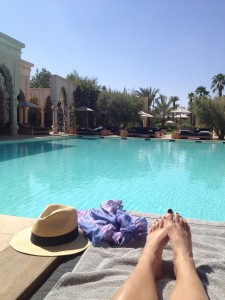 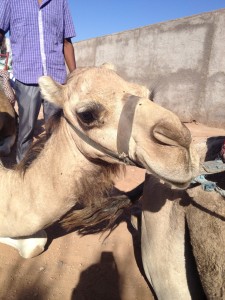