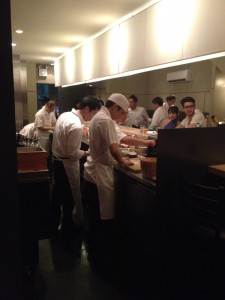 Neta is one of the newer and highly anticipated additions to the haute Japanese scene in NYC. I was expecting understated, but we actually walked directly by the restaurant which is hidden by its camoflaged facade amidst divey bars, a nail salon and a recording studio on 8th street. Inside, the unassuming spot is a even more austere, with bare walls and white ceiling lighting, it has just a few tables around the perimeter of the space with the focus of the room being a long center dining table right on top of the kitchen. The focus here is very clearly the cuisine. And the name actually says it all – “Neta” translates to “fresh ingredient” in Japanese.

Nik Kim and Jimmy Lau are the chefs at Neta who both hail from the reigning queen of Japanese restaurants, Masa. Kim worked under Masa Takayama himself in Los Angeles and then became the head chef at Masa when the restaurant opened in New York in 2004. Lau hails from Bar Masa which is a spinoff located in the ritzy Time Warner Center. Thankfully, Kim and Lau have brought their expertise to a place where the pricetag does not reflect the real quality of the menu.

Inside it was packed. All of the tables were full and people were waiting in the foyer in hopes that someone didn’t fill their reservation. We had a nice table for 4 in the front. The service was very attentive and we actually had about 3 people waiting on us. This was wonderful on one hand because our glasses were always full but on the other, they actually forgot to bring one of our dishes which we did not notice until after our meal.

The food itself is really excellent and an art form. Each dish was unique and original. Even the gari (ginger) was perfection. Tender, uniformly sweet and tangy and the ideal palate cleanser. Rather than doing the Omakase we decided to order a selection of small dishes to share with a few pieces of sushi to top it all off.

Our first dish was finely sliced Tai draped over ribbons of bitter greens dressed in a ponzu broth and decorated with tiny disks of summer truffle. The bold flavors of this dish really popped in your mouth. 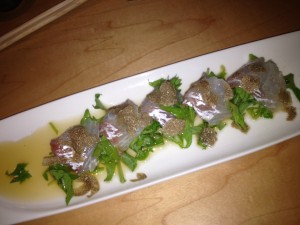 Tai with Yuzu and Summer Truffle

Next we had the grilled whole scallop which was served in its own shell. The perfectly cooked chunks of shellfish were topped with generous servings of uni and dressed in a light broth which was a garlic and soy butter that had an amazingly subtle yet rich flavor. Full of Umami. Yes, I did pick up the shell and drink the sauce. Discretely of course.

Scallop with Uni and Soy Butter

Next were the duck rolls with fois gras, crispy skin and grilled scallion in a cucumber cup. What was amazing to me was that someone had clearly spent a significant amount of time hollowing out and drying the cucumber so that it was dry enough to hold the duck without making it soggy. The strip of fois gras added another layer of richness to this already rich duck. This was like a top notch peking duck. 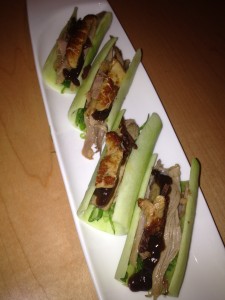 We were then served my favorite dish which was incredibly rich and full of deep subtle flavor. The uni porridge was unlike anything I have had before. This was a rice base dish that was turned into a sort of risotto with tons of fresh, warm, creamy uni and topped with summer truffle. I did not share.

After the porridge came the atlantic salmon which was a play on a spicy salmon roll only it came piled on top if a brick of crispy rice and garnished with bonito flakes. Rather than getting soggy after being placed on the table, the rice actually became crispier as it sat because it was served on a piping hot cast iron skillet.

The duck rice was prepared in a similar fashion and was the one dish where I almost felt like I had ordered the same thing twice. The flavor was a bit too similar to the cucumber dish in my opinion although really delicious on its own. 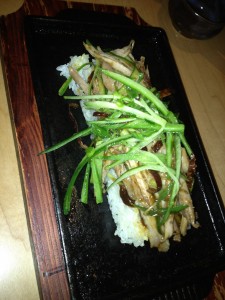 Finally, as is tradition, we were served our sushi last. Each tiny, bite sized piece had rice that was the right temperature and texture and all the nori on the rolls was crisp.

The Neta roll is their signature toro and scallion roll. Simple and fresh. 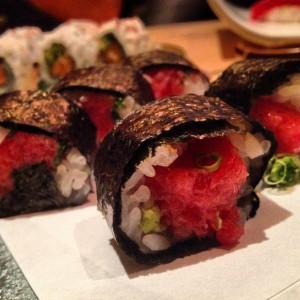 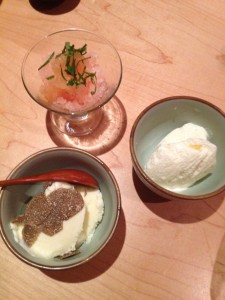 Neta must be added to your list, whether for a special occasion or just for a splurge.