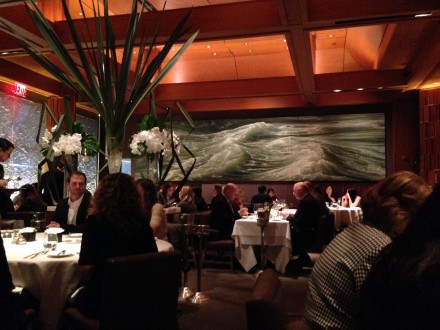 Le Bernardin is one of New York’s finest eating establishments and has been considered the best seafood restaurant since it’s opening in 1986 when siblings Maguy and Gilbert Le Coze brought the name from Paris. It is the only restaurant in the city that has maintained a four-star rating from the New York Times since its opening and has received more James Beard Awards than any other restaurant in the city. With a ranking of 29 from Zagat, it is evident that a meal at Le Bernardin is about as close to culinary perfection as one can get.

Chef Eric Ripert has headed the kitchen since Gilbert’s passing in 1994. The menu continues to almost exclusively features fish which is prepared with honor and respect of the main ingredient.

The space was renovated about 3 years ago and is truly sleek and refined. The décor uses elements such as wood, glass and natural fibers along with thoughtful lighting to create the feel of the ocean. Wavy wooden panels resemble deep sea kelp forests and a massive photograph of a rolling wave on the back wall make you feel as if you are enjoying your meal on the water. Each table is decorated with a flower and plates rimmed in silver with a sea urchin-like texture. It is a very calming sensation in comparison to the bustling city outside of the curtains. 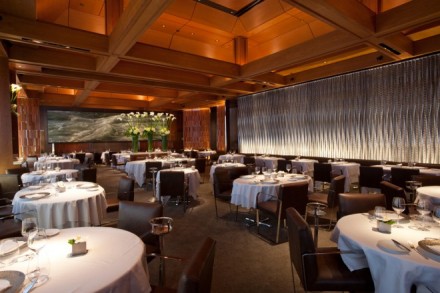 Le Bernardin has been on my list of places to go for as long as I can remember and I finally made it for lunch a few weeks ago with a friend on a day off of work. During the week there is a three-course tasting menu for lunch which we were able to take advantage of.

Upon sitting at our table our waiter offered us a cocktail while we reviewed the menu. Throughout the meal the service was impeccable – he was attentive without being overbearing and showed up at all the right moments. All of our dishes were served at the right pace and at the same time. It was very apparent that service is something Le Bernardin takes seriously.

The other thing you immediately notice is of course the plating of the food. Everything is so beautiful it looks exactly as it would in a magazine after being styled for hours and photographed with a professional camera.

We started with a rillettes of salmon which was served with incredibly thin baguette toasts. The salmon was easily some of the best I have had – bursting with flavor without being the least bit fishy. 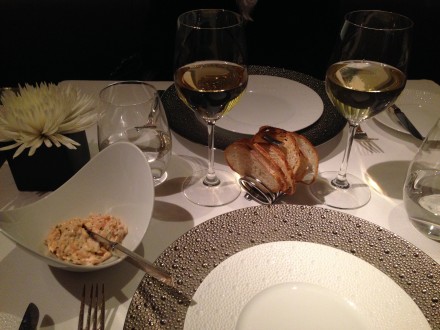 Our first course arrived which were the tuna and the “surf and turf”.

The tuna is one of the restaurant’s most famous dishes – thinly pounded yellowfin tuna cut to exact almond shape of the plate over a thin layer of fois gras on baguette and then dotted with chives and drizzled with extra virgin olive oil. I don’t really know what to say except that you have to try this dish yourself to understand. It is exquisite. 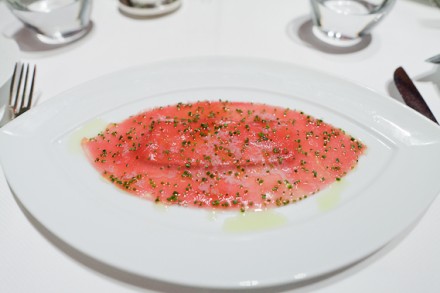 The “surf and turf” is also amazing. A bone filled with roasted marrow is topped with sea urchin, pickled onions, capers and a bacon crisp. The flavors were all perfectly balanced – the fat from the marrow, the saltiness of the capers, the acidity of the onions, and the smokey flavor of the bacon all complemented the delicate sea earthy flavor of the sea urchin. My only complaint here is that the portion is very small which made it difficult to share! 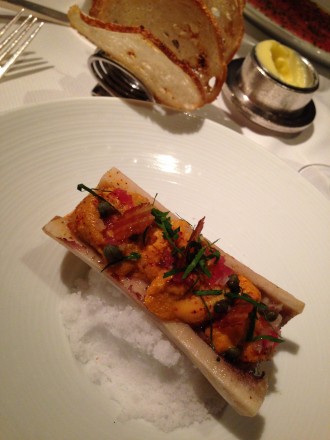 For our entrees we had the black bass and the merluza.

The black bass seemed like the most popular dish as I looked around the room. The crispy skin on top was a beautiful salty crust for the tender, juicy white fish. Around the filet were little columns of kabocha squash “ceviche” topped with roasted shishito peppers. A pool of bright orange Peruvian chicha sauce was poured around the fish. The black bass has a very subtle flavor and the sauce was flavorful without overpowering the fish. 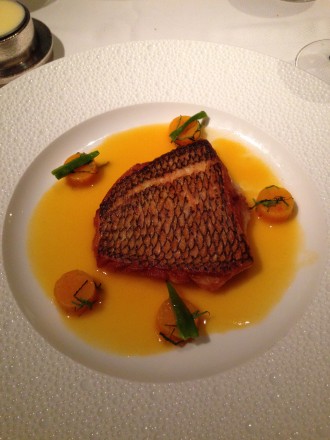 Merluza was a fish I had never had before so I did not know what to expect. The fish was sautéed nicely and had a much flakier consistency and came apart into slices with the touch of a fork. It also had a subtle flavor, being from the cod family. On the side was a turnip and fois gras “sandwich” with an herb salad. It was a little bite of turnip filled with rich fois gras and topped with a few little herbs and black truffles as fine as needles. The only thing I did not love about this dish was the sauce which was a lime fois gras sauce. For some reason it tasted a bit soapy to me. 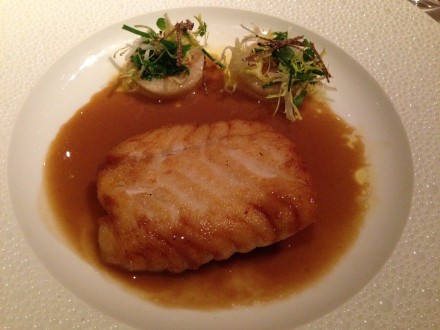 Dessert was also over the top in terms of both taste and plating. The chocolate mille-feuille was a true work of art. The chocolate mousse was rich and decorated by blades of carmelized phyllo, surrounded by thyme gelée and topped with a scoop of milk chocolate ice cream. Even as a chocolate lover this is a LOT of chocolate but really excellent. The best part were the tiny crispy, chocolate bubbles which were like barnacles clinging to the mousse. 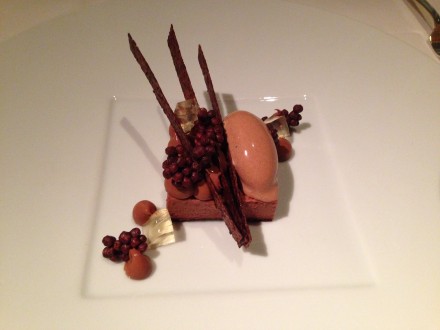 Even better than the chocolate was the coffee dessert. Caramel crémeux, layered with mascarpone mousse and a side of coffee ice cream. This was also decadent but light at the same time.

The final taste was their version of a “fig Newton” – a figgy, gooey little bite of cake to top it all off. 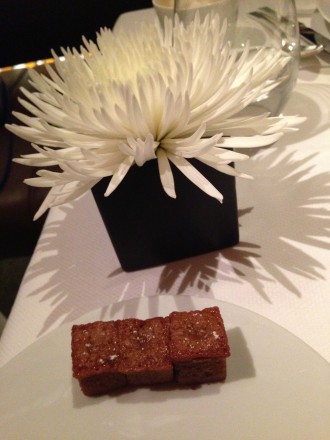 While Le Bernardin certainly lives up to its reputation in terms of food quality and service, there are several restaurants that I would rank above it when it comes to overall taste. Certain dishes were incredible and others were well executed but not as memorable.

Le Bernardin is a place that will hopefully live on for many years to come so that it can continue to bring some of the best food to the haut dining scene in New York.

One response to “Le Bernardin – NYC”