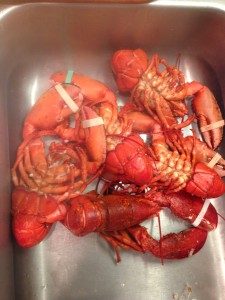 Summertime to me is basically synonymous with lobster. It just tastes so much better in the summer when you indulge in a heaping pile of succulent crustacean on a buttery bun after a long day at the beach. This past weekend I decided to try out a few different interpretations of the traditional lobster roll in the Hamptons (a special thank you to my hosts for this lovely lobster spree!)

Bostwick’s Chowder House isn’t technically a “restaurant”. It is a little take-out shop that conveniently has seating and a full bar (wink wink). Nevertheless, they do what they do extremely well. Seafood. What could be better than being greeted after a long train ride than a buttered potato bun heaping with large chunks of lobster, a little celery and just a touch of mayo? I typically go for hot lobster rolls but this is at the top of my “lobster salad” category.

South Edison is a new restaurant on the scene in Montauk that has a very 1950’s laid back feel to it. Everything in the restaurant is beach/summertime themed and the colors are meant to appear slightly sun-bleached. Compared to the many beach shacks that dot Montauk this is more upscale casual. To continue my lobster theme for the weekend I ordered the lobster buns which featured an entire lobster squeezed into three little buttery brioche buns – one with the claws and the others with tail. As simple as that with a little drawn butter these guys pack some big lobster flavor. 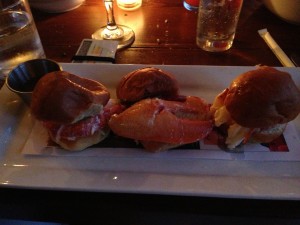 Lobster tacos have recently been added to the menu at Bostwick’s and my host said they are an absolute must try. I reluctantly agreed to share an order of the tacos with her because, really, who eats just one taco? I will admit she was right and not only were they delicious but with all the other seafood we ordered, one was just enough for me. This is a larger soft taco filled with chunks of lobster tail, a salsa of sweet corn, cilantro, and tomato with some shredded lettuce drizzled with a creamy tangy sauce and a spritz of fresh lime juice. 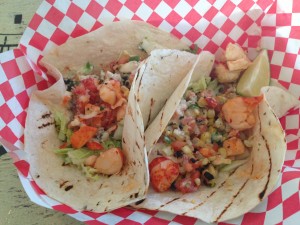 I am not going to say that any of the above was clearly better than another because they really satisfied three completely different types of lobster cravings and all were delicious!!