Silk Rd Tavern just opened a few weeks ago and after reading a bunch a reviews on it I was excited to make a reservation. I think they were probably still working out some of the kinks because the service while friendly, was overall pretty questionable. First of all, while the entire restaurant was basically empty, save one table, we were made to wait to be seated for nearly an hour. That is just plain illogical.

The space itself is the old Allegretti space which is located in sort a no man’s land in Chelsea/Flatiron. Despite this flaw the area is up-and-coming and certainly convenient to get to. I decided to organize a casual after work dinner one evening with a small group of friends to check out the new spot.

Executive Chef Leo Forneas’ experience began his culinary education harvesting fresh produce in his grandparents’ garden in the Philippines. His formal education ranges from Asian to Swedish with traditional French training and worked as Sous Chef at Jean Georges’ 66 Restaurant.

Once we were seated at our nice front corner table and we were introduced to our waiter, things immediately improved.

The heirloom tomato salad was fresh and flavorful. The tomatoes were juicy and the basil puree made its way onto every bite of tomato. The burata was pretty good but erred on the side of firm rather than very creamy. What made the salad more interesting was the pursulane – a funny small leafy green. When I looked up the exact description on Wikipedia, one phrase used to describe it was “weed it or eat it” – so basically a gourmet weed…opent to interpretation. It really did look like a garden. 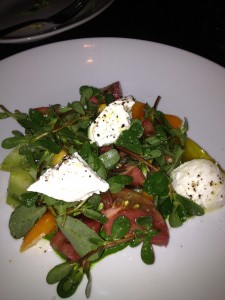 We also had a wild mushroom salad which was served with a truffle vinaigrette and spicy ginger goat cheese.
The salad smelled like intense truffle when placed on the table and was also mixed with some of my favorite deep purple lettuces. 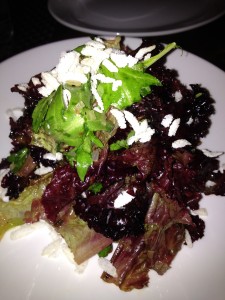 The big eye tuna tartar was nicely executed with an uni vinaigrette that was creamy and added a little je ne sais quoi to the dish. The fish itself was chopped in a beautiful brunoise accented by an even more finely chopped brunoise of asian pear (which tey called Asian celery). 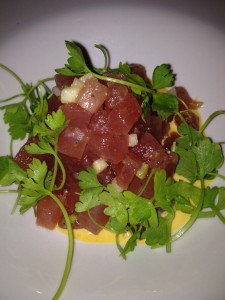 I had read a lot about the everything duck egg roll which is basically stuffed with as much duck as possible. This was pretty good and was quite rich given that one of the main ingredients is fois gras. It was also served with a spicy apricot mustard to dip in and cut some of the richness. 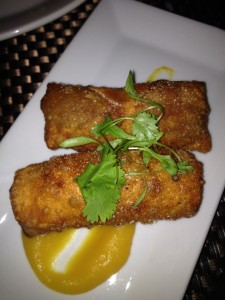 The tavern mac & cheese was a little bit strange. While I can appreciate the fact that the chef was trying to be creative here, Korean rice cakes are neither crispy nor tender but rather quite chewy when baked in a cheese sauce. I suppose if you can appreciate that texture then you would like this dish because the Vermont cheddar sauce was definitely flavorful. 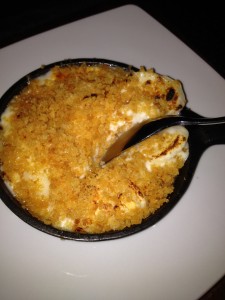 I was really looking forward to this pot pie being a huge fan of Fatty Crab’s signature chili crab dish and was hoping it would be a delicious way to more easily access the crabmeat and not make a giant mess. The dish was not quite as I had expected and ended up having a strikingly similar texture to campbells chunky soup. While that was a childhood favorite I am not sure I want to be ordering that in a restaurant for $32. 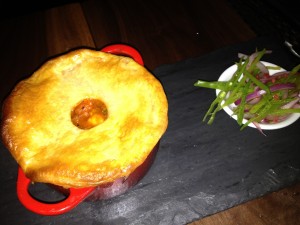 Another entrée we ordered the special fried chicken with chili biscuits. This was really delicious and should be added to the full menu. The crispy chicken was served with a sticky-sweet dipping sauce and the spicy warm biscuits were a perfect complement. 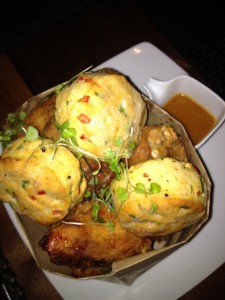 Lastly we ordered a side of crispy eggplant fries which were tasty but a bit greasy. 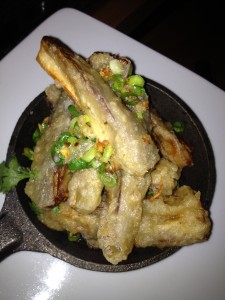 I don’t think the dessert menu has actually been published yet but they were so kind to bring us a lavish assorment of treats to end our meal. Perhaps to make up for the fact that we had waited so long to be seated.

First was the vanilla bean panna cotta which was topped with crispy coconut. 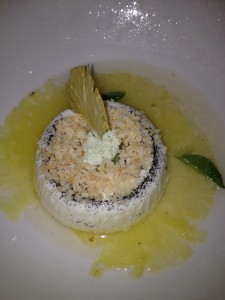 Then we were served orange popsicles on ice which were much appreciated on a sticky summer night. 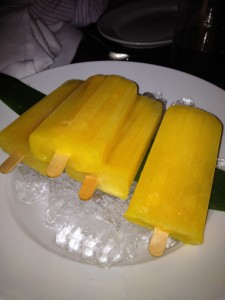 We also received an interpretation of a strawberry shortcake that was ok but layers were almost like plain white toast. 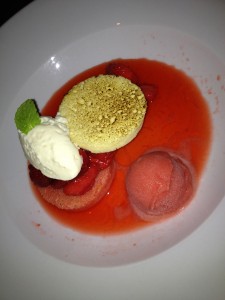 Lastly we had warm cinnamon sugar dusted doughnuts with an incredible yuzu dipping cream. A very tasty take on the doughnut trend. 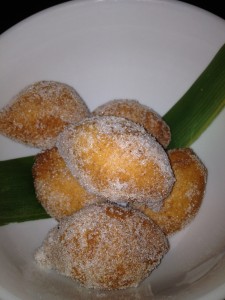 Silk Rd Tavern is definitely worth checking out if you happen to be in the Flatiron or Chelsea area.