The Pegu Club is a large cocktail lounge in Soho that is named after a British Colonial Officer’s club near the Gulf of Martaban, Burma. One Pegu master mixologist Harry Craddock became famous for memorializing the signature Pegu cocktail in the Savoy Cocktail book in 1930 – this gin-based beverage can be found today on the menu at Pegu.

It is much more spacious than many other specialty cocktail bars in the city such at Little Branch, Raines Law Room or PDT which makes it easier to seat larger groups.

All of the cocktails are meticulously created and served in pretty glasses with various decorative garnishes. 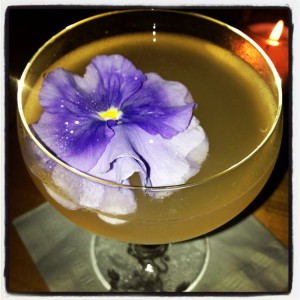 The bar menu is also good with creative little bites. I had BBQ duck sliders which were served on buttery brioche mini buns. These were good but probably too much sauce because the duck could hav easily been mistaken for beef or any other type of meat for that matter. I also had the deviled eggs with smoked trout. These were also fine but not the best I have every had. Still some of the better bar snacks you are are likely to find but the focus is definitely the cocktails.