There are very few restaurants in midtown that don’t say “strictly business dinner”. While Koi could definitely be a good choice for a business dinner, it is also a pretty decent choice for a meal after work with friends especially if you are going out in the area that evening.

The original Koi was opened in LA and there are also outposts in Vegas and Bangkok which alone tells you the kind of sceney clientele they are after. Their strategic location in the Bryant Park Hotel above Cellar Bar helps them to capture some of that same clientele in NYC as well. The interior is clean dark wood accented by [fake] bamboo plants on several walls.  A giant meshy structure in the center of the room adds a sculptural element to the décor.

A few friends and I were going to a concert nearby so it was an easy spot to go for some small plates and drinks beforehand.

First we all shared the edamame dumplings. These soft noodles were filled with creamy puréed edamame and drenched in a thick buttery mirin sauce with some pieces of lobster and assorted mushrooms.  It was almost like a Japanese-French fusion dish. 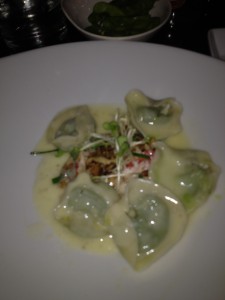 Next was the Kobe beef carpaccio with fried shiitake mushrooms and micro greens dressed in a yuzu vinaigrette. The only off-putting aspect of this dish was the brown color of the meat but that certainly did not take away from the rich flavor. The bits of fried mushroom had the texture of a crispy salmon skin but with an earthy flavor.

We also shared the crispy rice topped with spicy tuna. These were a little bit heavier than your normal piece of sushi but had a nice bite as well as the heat from the spicy sauce and the slice of jalapeño. 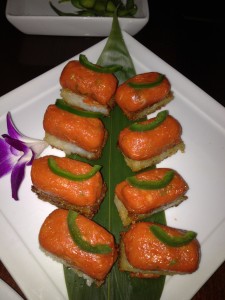 I am a little bit wary when the same sauce is used on multiple dishes and that same buttery mirin sauce was definitely used on the hot lobster tail dish although this time masquerading under the title of “truffle butter sauce”. The dish came out neatly arranged in the shape of the lobster and the meat was nicely cooked topped with a yuzu gremolata.

I guess we were in a lobster mood because I ordered the lobster roll which came topped with a warm orange sauce. This was pretty good but the bland vegetables inside paired with plain rice did not add much to the already mild flavored lobster. 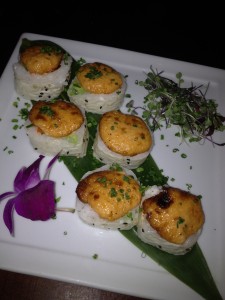 No Japanese meal is complete without a little bit of uni so a few pieces of uni sashimi were in order. The perfect Japanese dessert. 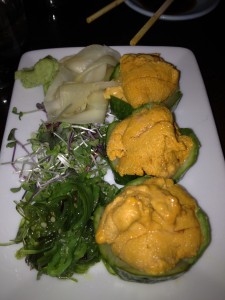