In New York City which is abound with amazing restaurants that offer the freshest of raw seafood, ZZ’s Clam Bar manages to go above and beyond, differentiating itself and separating itself from the pack. Rich Torrisi, Mario Carbone and namesake partner Jeff Zalaznick’s tiny, secret boite is a cocktail bar that offers some of the best dishes in the city.

The immaculate space offers just 12 seats and is guarded by a doorman, which may seem pretentious but as a diner trying to escape the frigid winter air I was very happy that the door remained closed most of the evening. Once inside your eye is drawn to the back of the room where a Thomas Waugh works to build all of his magical cocktail creations. While I did not see it myself, he allegedly wears little booty shorts with his tuxedo jacket to spice things up even more. 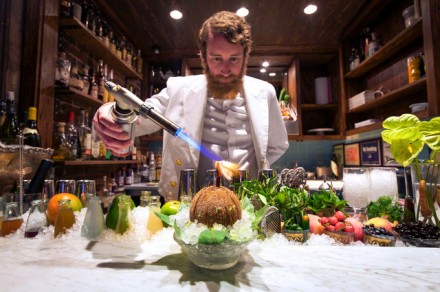 I would describe ZZ’s as having a sort of kitschy-glam feel or maybe vintage-tiki with some old Hollywood and the 60’s vibe of the summer resort from the movie Dirty Dancing – all while feeling like a seafood restaurant. It is intimate and everything is expertly curated from the silverware to the artwork and flower arrangements on the tables. Each drink on the menu is served in a different vessel – ceramic buddhas, brass pineapples, and whole coconuts all collected from thrift stores to Etsy and beyond.  The music is also great ranging from the newest groups to old favorites – just another layer in the overall experience.

We sat at the table for two closest to the bar and ordered some cocktails and oysters before fully examining the menu. I sipped on a milky green concoction called the “Pistachio” which included Plymouth Gin and kumquats – delicious. My dining partner had the refreshing “Mango” which was a tropical mix of bourbon, Aperol and lime with sweet mango. 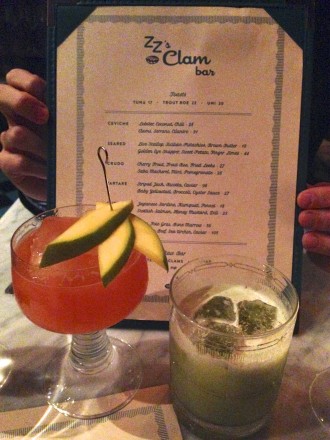 Every food item is passed to the waitress through a tiny window which leads to the kitchen downstairs. The first item to come through the window for us was a little amuse bouche of razor clams on a little taco shell to whet our appetites. 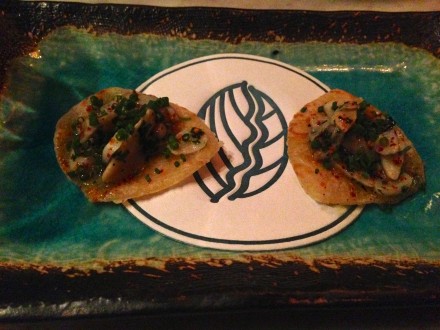 Next came a big dish of chilled east coast oysters – briny and refreshing with a trio of sauces including a traditional cocktail sauce and a mignonette with blistered shishitos. 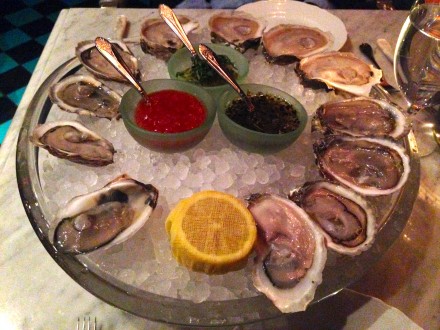 Next came one of my favorites of the evening – described simply as “Tuna Toast” this might have been one of the best toasts I have ever had. The bright red tuna was prepared almost like a steak tartare and tasted a bit mustardy and oniony on top of the butteriest pieces of brown toast. This is absolute heaven. 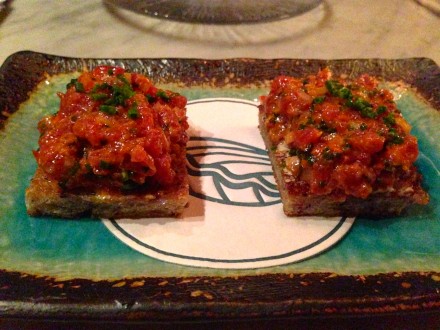 The live scallop was another of my favorite dishes. It was finely slices in its own shell and bathed in brown butter and topped with shaved pistachio. Such a delicate combination of flavors with a simply gorgeous presentation. 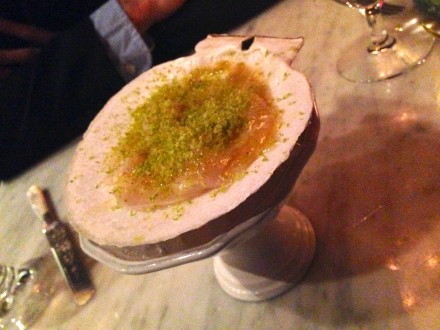 More drinks were in order before continuing. I ordered the Pineapple, which was another gin drink with house made limoncello and chamomile. This was not too sweet and was served in their signature brass pineapple. The Apple was another refreshing combination of Rye, shiso and basil. 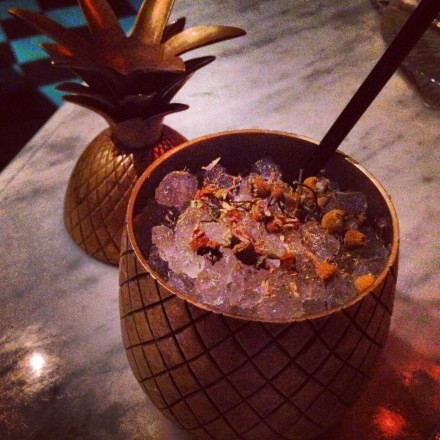 The next dish was baby yellowtail with broccoli and oyster sauce. Simply a very fresh tartare of delicious fish.

The next dish was another one of my favorites – finely sliced razor clams with Serrano ham in a tangy cilantro pesto on top of some potatoes. The potatoes served as a nice vehicle to sop up all the extra cilantro sauce. 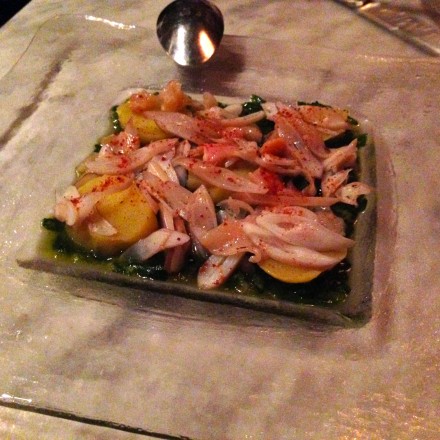 The lobster ceviche sounded amazing in theory but was actually my least favorite dish. The lobster meat was tender but the coconut milk and chili sauce was too bland and watery. 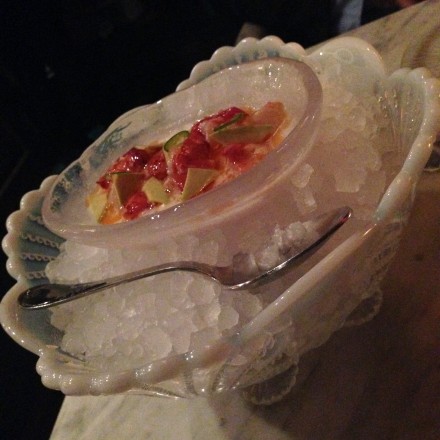 The mackerel with mint and pomegranate was also very good but nothing really to write home about. 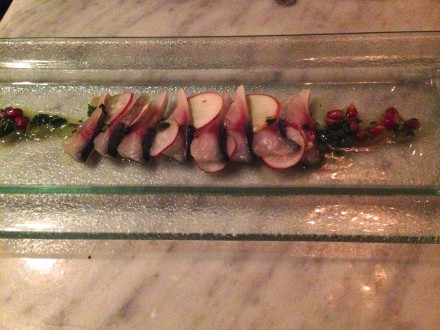 The final dish was the piece de resistance – the most expensive dish on the menu at $105 but – you get what you pay for – worth every penny. Chianina beef carpaccio painted with a thin layer of ricotta, drizzled with extra virgin olive oil and topped with chunks of lobster, razor clam, caviar and beautiful Santa Barbara uni. I mean could you ask for anything more on a carpaccio? Served with more of the butter toast from earlier in the meal this tops the list of most extravagant things I have ever eaten. This dish alone makes this restaurant one of my EPIC Picks. 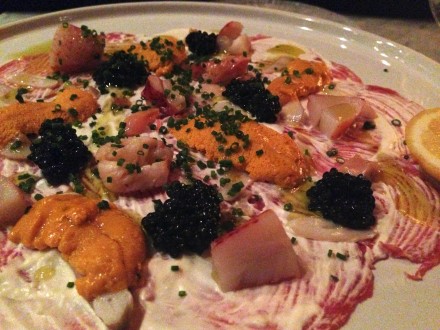 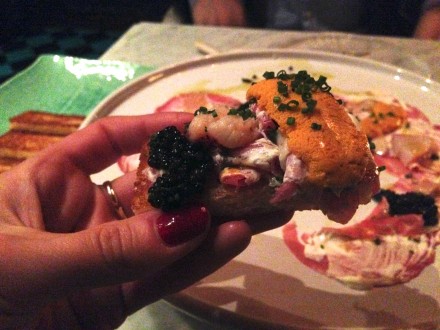 The last cocktail we had to top off the evening was the coconut. The Trinidadian rum and acacia honey cocktail is served in the coconut shell with a smoldering cinnamon stick that gives it a warm and spicy flavor. 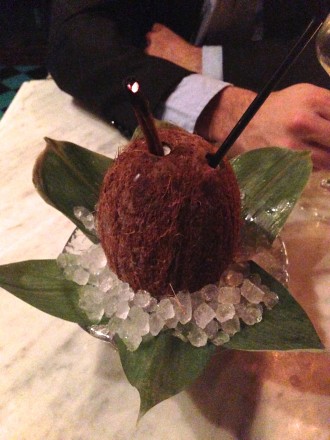 ZZ’s Clam Bar is a very exciting addition to the New York restaurant scene. With its creative cocktails and exquisite seafood dishes it is worth saving up for a special meal here. 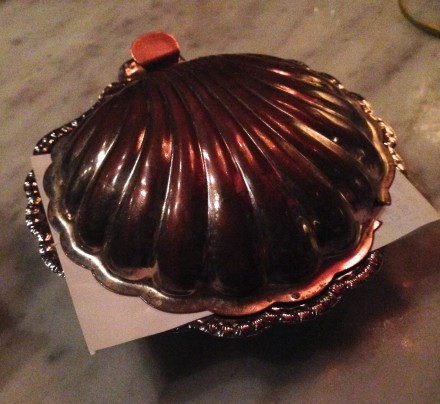 Our bill came in this adorable little clam shell