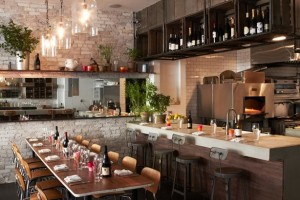 The concept behind Wong is to be an Asian restaurant that features local and seasonal fare. Chef Simpson Wong is of Malaysian heritage but the menu is broader than that. Chef Wong has been on the restaurant scene for a while and his first restaurant, Jefferson, even made a cameo on “Sex and the City” some years ago. After suffering a heart attack he closed the restaurant and returned home to Malaysia to travel with his elderly mother. Throughout his travels he collected ideas and inspiration for a menu that would be healthier than some traditional Asian dishes. While this is definitely not diet food it does exhibit a lighter quality.

The space is small and mostly made of concrete with a bar to the right of the entrance. There is not much to it besides a bunch of small tables that can be easily rearranged and stackable wood and metal chairs. The kitchen is open concept and there are several seats at the counter which allow you to have such a front row seat that you should probably wear layers if put there because it gets a little toasty from the open oven.

I started with a spicy gingery cocktail as I waited for my friend to arrive.

Duck is prevalent throughout the menu including some of the lesser used parts such as the tongue. There is even a tasting menu (the Duckavore Dinner) that offers 6 dishes each featuring the protein – including the dessert. Other unusual ingredients make their way into dishes such as sea cucumber which is not seen very often.

The duck buns were what I wanted most on the menu. These were much meatier and less fatty than any pork bun I have ever had. The bun itself was also golden brown and crispy as opposed to the pillowy white bun you would see on a pork version. A few thin slices of cucumber and some butter lettuce allowed the duck to speak for itself. The buns were piping hot when they were placed in front of us but I dove right in and enjoyed every minute of it. 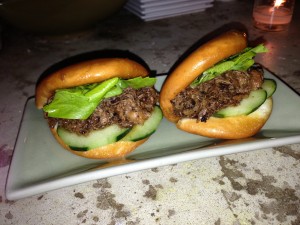 Next we shared two entrees. The lobster egg foo young was the more impressive of the two. This dish was departure from a traditional egg foo young which is a type of Chinese omelet where all the ingredients are bound together by the egg and served with a brown sauce. This version reminded me much more of Italian baked eggs. The skillet came with a half lobster cooked perfectly atop two runny salted duck eggs in a spicy tomato-based leek sauce sprinkled with dried shrimp. Lots of cilantro brightened up the flavor of the dish. A piece of crusty bread to sop up the sauce made it seem even more Italian. 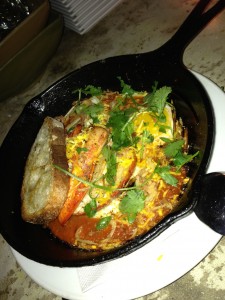 The Cha Ca La Wong was a less memorable for me. This was a rice noodle dish with Hanoi-style Hake with turmeric and dill. I found the flavors to be much more bland but all in all it was a good noodle dish. I do enjoy a good rice noodle. 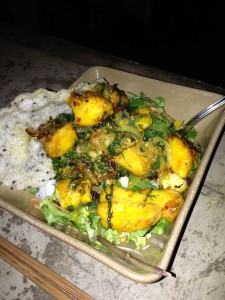 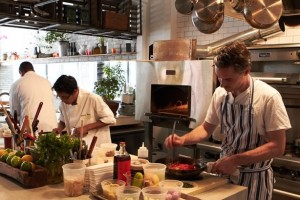