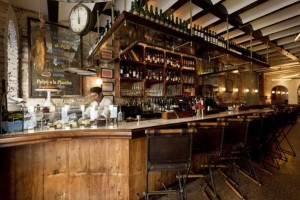 Tertulia is a Spanish gastropub that came to be after Chef Seamus Mullen became inspired by the food of Northern Spain – its simplicity and quality of ingredients.

Before having dinner at Tertulia I had read some reviews that since opening with a bang in 2011, the food can be a little inconsistent. I was pleasantly surprised by every dish and thought it was actually pretty damn good. I am siding with Adam Platt on this one. My friend and I have a biannual dinner and go to a new place each time. Since he knows one of the chefs at Tertulia, we decided to check it out and leave our meal fate up to him.

The first dish we had was a delicately arranged hamachi crudo with avocado. This was very visually pleasing, served on a piece of slate and garnished with a few little greens and slightly pickled vegetables. 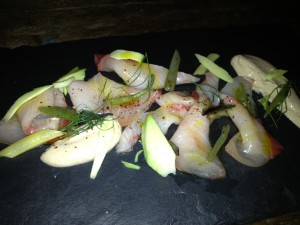 Next was the traditional pan con tomate, a staple that no tapas meal is complete without. Crusty bread rubbed with garlic, fresh tomato and a little salt. Of course this goes best with a cured Serrano ham. On the side we had an extra little bite – toast topped with a soft, mild sheep’s milk cheese, slow roasted tomato and some tangy white and salty black anchovies.

We then had a plate with a couple more bites. One was a little toast with crushed egg, potato and Ibérico ham. This was so rustic and flavorful. The other was smoked pig cheek, quail egg and a pickled spicy pepper. The pig cheek was rich and complemented by the vinegary pepper. 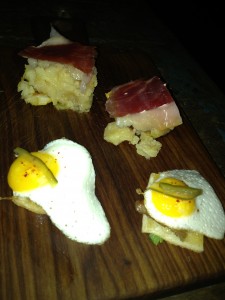 Luckily a salad came out next – a mixture of roasted and smoked beets topped with herbs, pistachios and a few bites of a creamy sheep’s milk cheese. 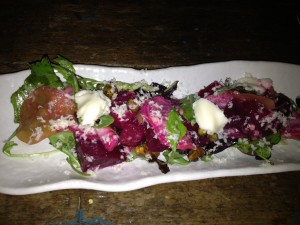 We then had a dish that I did not see on the menu so it must have been a market specialty. It was crispy blowfish tail with a basil aioli. This was so interesting and tasty and I was also very excited to try blowfish for the first time. The little tails were butterflied and fried. They had a mild flavor of a white fish but were more meaty than flakey. 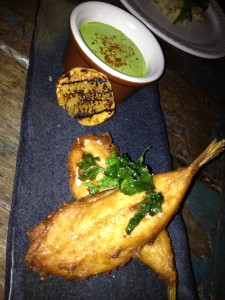 Next was another seafood dish – grilled octopus with fingerling potatoes, Castel Vetrano olives and Meyer lemon. This was a good dish but not my favorite of the evening. The octopus was maybe a little bit dry.

The last two dishes we had were their version of “surf-n-turf”. The surf was a squid ink rice dish that was like a deconstructed paella or a risotto and was topped with a little pile of uni. The turf part was a grilled lamb breast on top of creamy farro with cauliflower. The lamb was reminiscent of pork belly in the sense that it has thick layers of meat and fat (which I usually cut away) but it was much gamier than a pork. The farro beneath it was delicious and was a little zesty garlicky cream. Interestingly, the cauliflower was thinly sliced as a garnish and looked like a piece of coral. 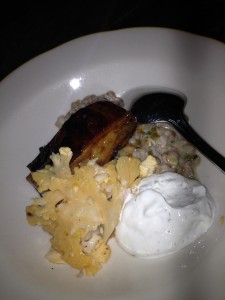 Dessert was basically a classic creme brulee which they called crema Catalana and a dark chocolate and coffee ganache with almond crust and a bit of sea salt. 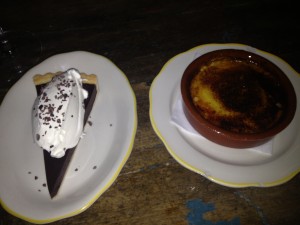 Tertulia a very casual place with a homey feel and dressed up rustic, simple Spanish cooking. It would great just to drop in with a friend or for a date.