One of my best friends and college roommates was in town visiting this past weekend so the first thing I did was book a boozy brunch for a large group. We ended up being about 12 people- give or take a few with the ebb and flow of the crowd…many of whom were suffering from the night before.

Sons of Essex ended up being the perfect place for several reasons. While sadly the mechanical bull has gone msising from the old Mason Dixon space, the ambiance was perfect for the group on that day.

According to their site, the reason for all of the interesting, eclectic decor is that the restaurant was named after the “sons of liberty” which was a group of tradesmen and artisans who were able to hold their ground on the LES when the British invaded. I don’t know if that was readily apparent, but the dim lighting, rustic furniture accessorized with antiques and old books, big comfy banquets, and even a huge screen in a sunken “living room” on one side projecting various sporting events all made for a relaxing meal.

The food was generally solid and pretty much everything on the indulgent menu at least looked appealing although we definitely had a few rogue dishes that were questionable.

I split two dishes with my friend -eggs benedictowitz and a burger- basically your two brunch essentials. The eggs were poached on top of a potato pancake with smoked salmon and hollandaise. The presentation was very nice- everything was served on a long wooden board which made it feel kind of farm-ey. The Eggs were nicely cooked and runny but the potato was a little too thick. It was nicely crispy on the outside but a little mushy in the center.  They were also served with an uneventful side salad. 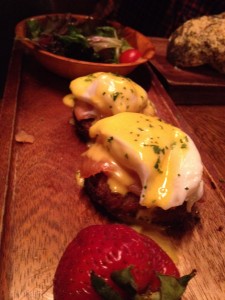 The Essex burger was a dry aged prime blend with carmelized onions and swiss cheese. This burger was almost exactly the size of my (albeit small) head. Even when cut in half it easily took two hands to grasp. The juicy aged meat was slathered in melty cheese and gooey onions. I think the best part about the burger though was a special pickle sauce that was served on the side. I am not sure what exactly made it different from your traditional Russian dressing but the zesty sauce made pretty much everything taste good.

We also had a side of truffled tater tots which had a little bit of parmesan cheese. I mean I like tater tots just as much as the next person but they pretty much always taste the same. Truffled or not. 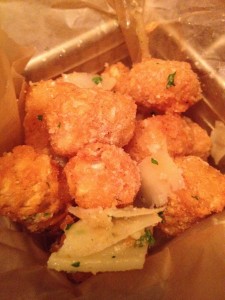 Another friend ordered the flap jacks which really did sound promising. Pancakes with star anise butter and your choice of either bananas, apple pie crumbles or chocolate chips. Unfortunately, this ended up being one of the ugliest dishes I have ever seen and I am not sure I would have even served this to myself if I were home alone. Pale, pasty flapjacks badly in need of a bronze. 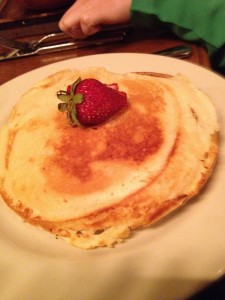 To wash it all down of course we had some cocktails. The bloody Mary’s were quite good and had enough kick from the horseradish and pepper but without making you break into a schvitz. I also had a mimosa-type cocktail that had St. Germain which was also decent although somewhat lukewarm. A few bottles of rose are also standard for brunch. 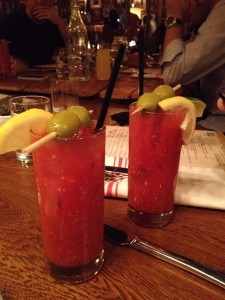 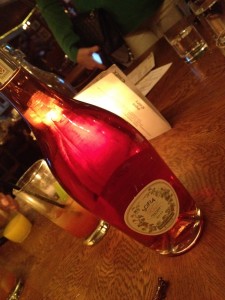 Sons of Essex is a great place to go for a fun brunch with friends, especially after a night out when you are feeling a bit more forgiving when it comes to the food.