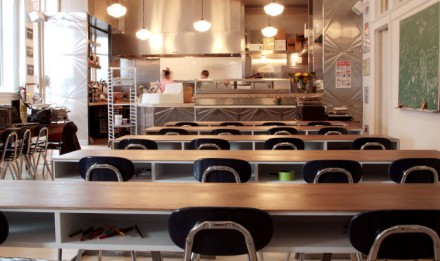 Part of my New Years resolution is to catch up on all of the restaurants I ate at in late 2013  and still need to write about! So much eating and so little time. So here goes…

M. Wells Dinette is located within MoMA PS1 in Long Island City. This unique and creative eatery is perfect for the interesting (if strange) artwork that inhabits MoMA PS1.

On a brisk day in October a few friends and I decided to venture to Long Island City to see some of the exhibits at the MoMA as well as try to catch a glimpse of the famed “5 Pointz” graffiti Mecca before its imminent destruction which would happen shortly thereafter.

Hugue Dufour and Sarah Obraitis created M. Wells as a sort of homage to the PS1 building’s former identity as a schoolhouse. Instead of traditional tables there are desks all facing in one direction towards the open kitchen. The walls are lined with vintage class photos and chalkboards with the ever-changing menu scribbled across them.

When you are seated at your table you are handed one menu which is a ruled notebook with the days selections neatly printed. 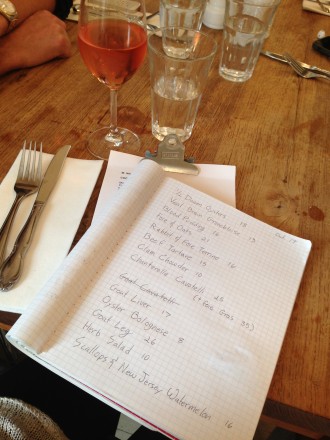 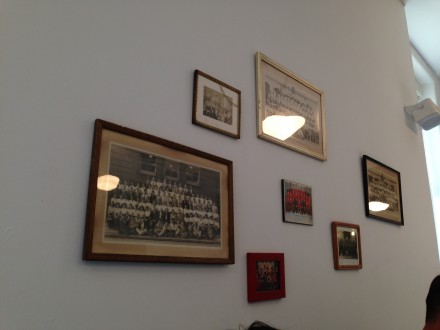 The menu at M. Wells is surprisingly exotic – most dishes included offal, shelfish or raw and gamey meats. Many also included heavy cream so this is not a spot for a quick healthy bite, but rather an indulgent experimental meal. Of course I loved every minute of it. 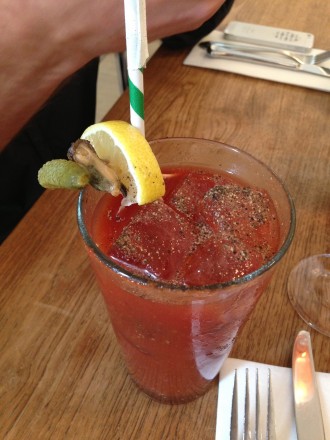 The three of us sat down after waiting in line outside for about 20 minutes. First was a beef tartare that was immaculately seasoned and served with a runny poached egg some crusty bread. The portion is large enough to almost make an entire meal. We had a side salad of some herby greens in a creamy dressing. 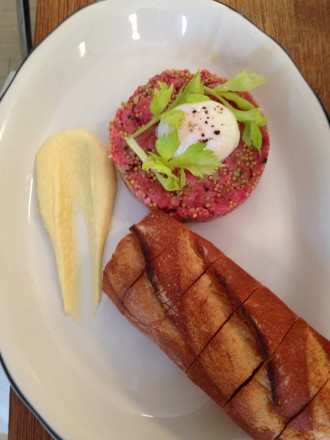 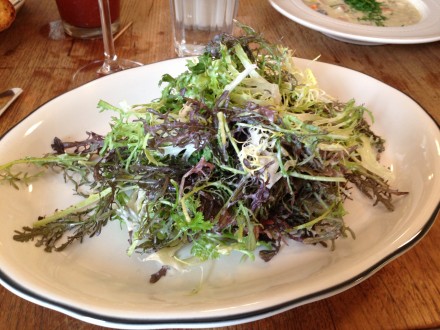 We also had an order of the clam chowder which was also very good. Big chunks of clam and fresh vegetables dotted the thick soup. 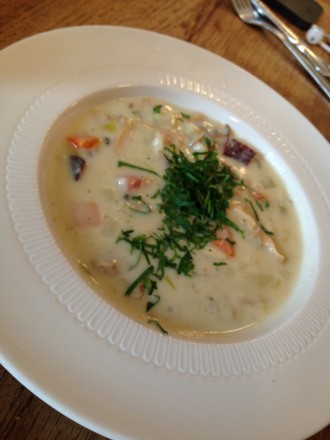 The scallops with New Jersey watermelon was very flavorful and fresh but in comparison to the other dishes it should have been more clearly advertised as an appetizer and not an entrée. Luckily we had the pasta to fill us up. 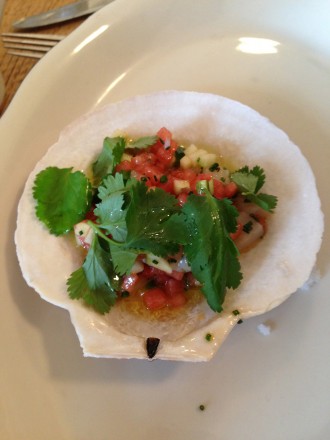 As my main I had perhaps the heaviest pasta I have ever eaten – hand rolled cavatelli with a cream sauce (yup, more cream) with woodsy chanterelles mushrooms.  On top was a huge piece of decadent seared fois gras. To really set this pasta over the top was the generous shaving of black truffles over the top. As much as I shared, and as much as I loved it, the pasta was so decadent that even three people struggled to finish one portion. 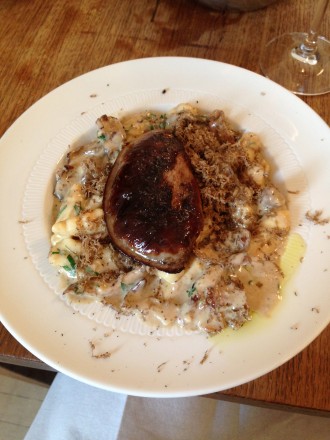 M. Wells is an adventure of a meal if you are willing to try some unusual combinations of ingredients and adds to your overall experience of having a culture-filled day at the museum. The food is prepared very well and the chef has a very good handle of the preparations allowing all these ingredients to shine. Make it a point to visit M. Wells on your day of culture at PS1 or if you just happen to be passing through Long Island City. 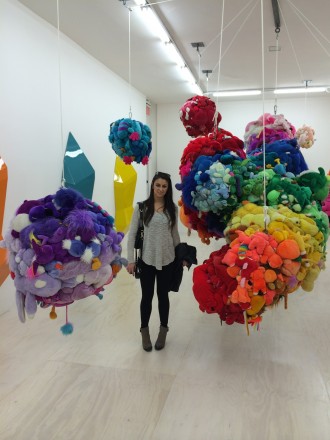 The fluffiest of exhibits at MoMA PS1 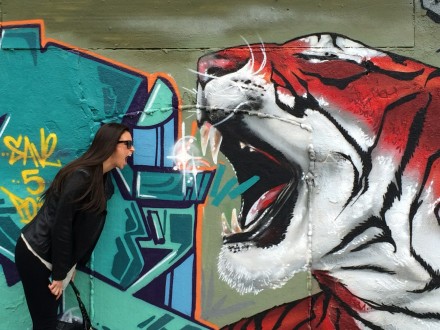 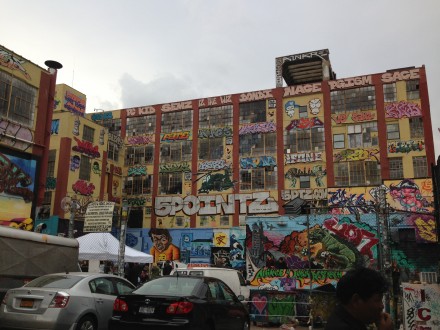 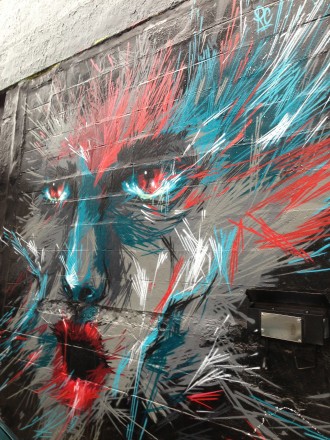 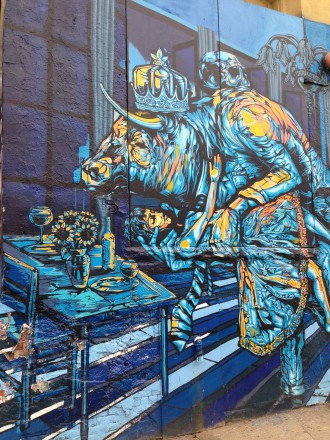 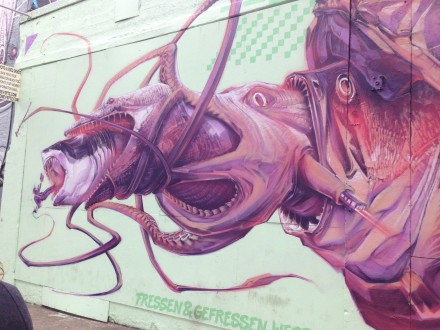 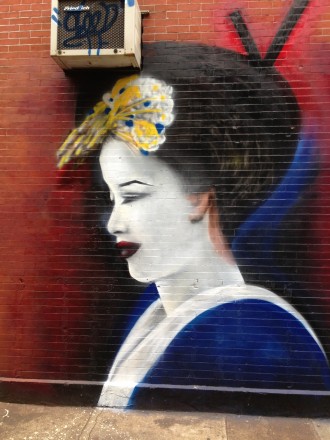 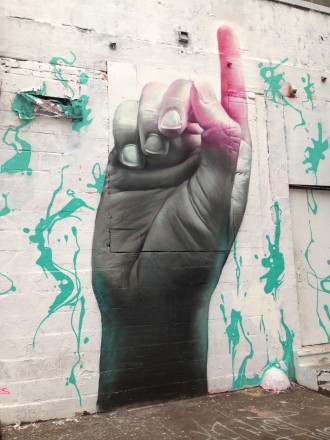