Last night marked the opening friends and family night for Cómodo restaurant in Soho. I was particularly excited about this opening not only because of the interesting background of how the restaurant got its start but also because I am childhood friends with two of the restaurant’s main contributors. Friends and family is always the time when a restaurant gets to test out their menu to make sure everything is running smoothly before opening its doors to the general public, so last night the cozy space was packed with excited supporters.

Cómodo occupies a rustic and casual little space with bay windows at the front and an open kitchen. With a concept of new yet homestyle interpretations of Latin American cuisine and a warm ambiance of long communal tables with some smaller more private tables all surrounded by brick walls, it certainly delivers on its name which translates to “comfortable.”

The restaurant’s chef Felipe and Tamy Donnelly got their start in an unusual way. They never actually intended to open a full fledged restaurant but their passion for cooking and entertaining led them in that direction. They began by having small dinner parties in their own apartment for friends where the agreement was that Felipe would cook if their guests brought wine and Tamy would write about the experience. As word got out about their fabulous dinner events through word of mouth and other food blogs Felipe and Tamy’s home became an underground supper club. When they were suddenly shut down for being unlicensed to serve the public they had to find an alternative. They decided to open Worth Kitchen where they would serve 40-50 people on a given night and soon that turned into the idea of Cómodo. 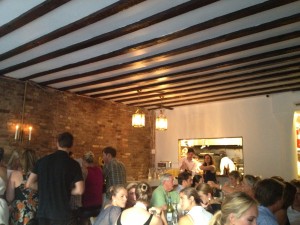 I was lucky enough to be seated by a big bay window in front with some friends to enjoy both a full view of the interior as well as a nice breeze from outside.

We were served an appetizer of escolar tiradito with uni and a mint yogurt vinaigrette. The simple, fresh dish looked beautiful on the rustic clay plates. 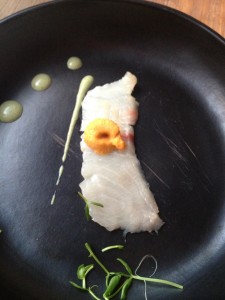 The lamb sliders served on pão de queijo (Brazilian cheese bread) with chipotle cream dipping sauce were the table favorite. The tender little lamb meatballs on chewy, cheesy bread had everyone eyeing nearby plates for any left behind. Not a one in sight. 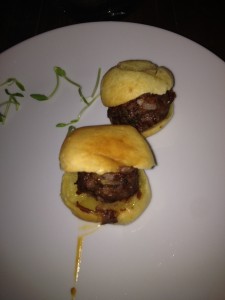 Our main course was a seared duck breast with a fruity ‘classico’ sauce and a warm quinoa that was laced with gooey mozzarella and diced tomatoes. The meat was nicely cooked with crispy salty skin. 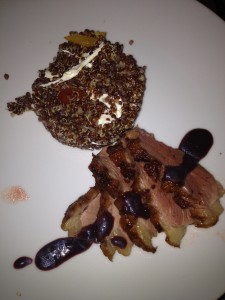 I am looking forward to sharing many meals at Cómodo and sampling their very tempting and creative menu! 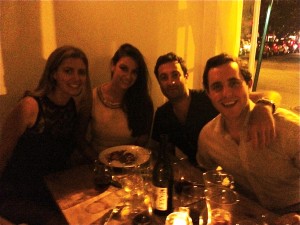