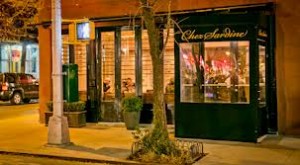 It is Gabe Stulman month for me. Promptly after eating at Montmartre I asked my friend to make a reservation at Chez Sardine which had been on my radar since it opened. The tiny little West Village spot has been nearly impossible to get into since day 1 and rightly so. Several of the “dishes” we had were so delicious that a silence fell over the table (unagi and pork hand roll). I use quotation marks because nearly everything on the menu should really be labeled “bites” for their actual size. This is a double edged sword because it allows you to try most of the menu with just a small group but it also racks up a sizable tab very quickly if you are hungry. Many of the ingredients also show up several times so there is a tendancy to have overlap.

The space itself does not have much decor to speak of as you would expect your typical Japanese restaurant to look – just of few prints of fish on one back wall, big windows along the entire front and an open kitchen and bar. The vibe is definitely more laid back than the average higher end Japanese restaurant.

We sat down at one of the tables for 4 along the wall and proceeded to order up most of the menu. To start we were given a little bowl of Japanese marinated vegetables with chives – a palate cleanser of sorts. Next up was the caviar and butter toast. This singular little square of crusty bread was definitely intended for one but given that the price for two toasts was about equal to a pricey entree anywhere else, we tried to limit ourselves just a tad. 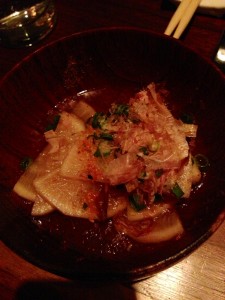 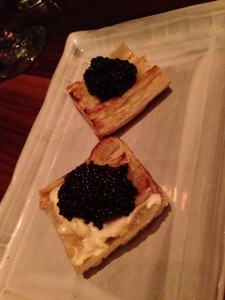 Next was easily the best dish of the evening (as mentioned above)- pork and unagi hand rolls. These were incredible. Rich tender pork and unagi juice was absorbed by perfectly cooked rice. 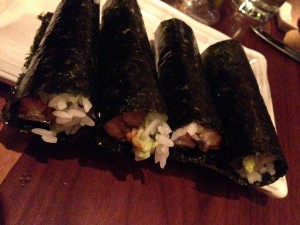 The sushi arrived all together on one plate and some of the pieces were a bit difficult to identify this way. The oyster was very fresh and plump with a bright sauce of apple and chive oil. 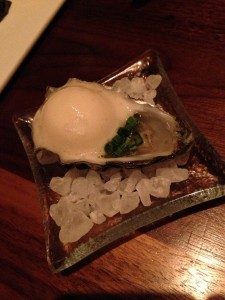 The beef tongue was one of the two adventurous dishes of the evening. I was expecting it to be like a rubbery, chewy flank steak but on the contrary it was very tender and flavorful. The ponzu and jalapeño added a little kick and tanginess. The hamachi and the snapper were good but definitely not the most memorable pieces of sushi I have had. The fish was a bit warm as though it had been sitting around waiting to be served for too long. Their respective seasonings of ginger and horseradish did not add too much. The chopped beef with sea urchin was a very solid combination – like a little bite-sized Japanese version of steak tartare. 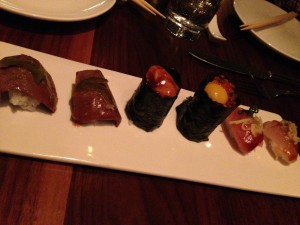 We had some more beef tartare in the form of a larger plate with lime cream and horseradish. This was also very good on the toasty baguette drizzled with olive oil. The beef was neatly and thickly chopped which I find much more appealing for a tartare. 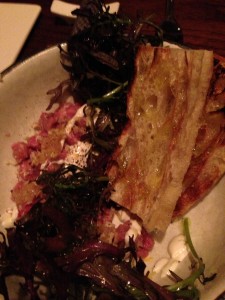 The other memorable dish was the “breakfast pancakes”. Again this is tiny so one can only really be shared between two people. The tiny blini pancakes were layered with a mixture of chopped smoked arctic char, hamachi and mackeral. The plate was then artistically decorated with salmon caviar, chives and a yogurt sauce. 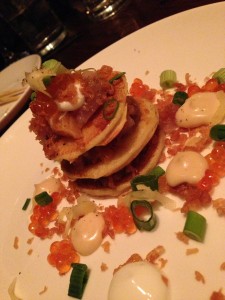 For the larger plates we decided on the pork belly, the miso glazed salmon head and the fois gras grilled cheese. The miso-maple glazed salmon head was a fun order and the flavor was delicious. It was sweet and smokey from the grill. It is a bit messy to eat with a group because to get all the meat it’s almost impossible not to go in with your fingers. Luckily it comes with some extra napkins. 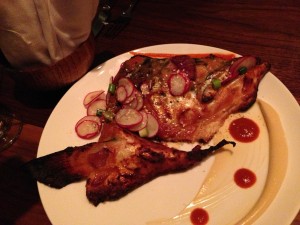 The grilled cheese has had mixed reviews because it is so incredibly heavy. It is literally fat on top of fat, slathered with fat and then grilled. I say yum. The pickled cucumbers in the center added the necessary acidity. Cut into 4 I think this was pretty manageable. 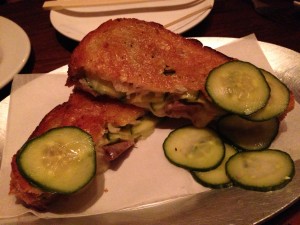 By this point we had so many rich dishes that a whole entrée sized portion of pork belly seemed a little overwhelming. In terms of execution it was nicely done with a sticky sweet outside and topped with a slow cooked egg and some cabbage. 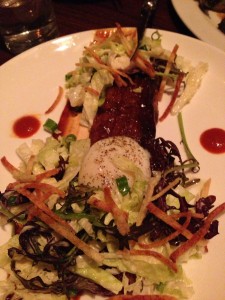 The one lowly vegetable we ordered was a plate of brussels sprouts. In theory this was a good idea but they were also fried and topped with toasted pumpkin seeds. While tasty, this did not do much to lighten the meal. 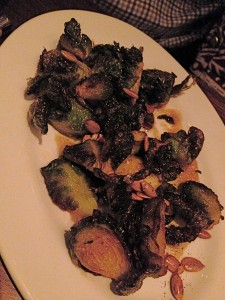 To top everything off they brought us each a mini cup of white custard drizzled with maple syrup and sprinkled with a few rice crispies. If I didn’t know any better, I’d say they pureed a bunch of Eggo waffles and made a pudding out of them. This might sound like an insult but it was very good, especially if you grew up on Eggos.

Chez Sardine is a great place to go on a double date or with a small group of friends to catch up. Be prepared for a very rich meal!

Thank you to my friend Demetri Themelis whose valued opinion helped greatly in the commentary for this review!