Takashi is a name you may have heard primarily because it is rated a Zagat 27 which is pretty high up there. Especially for food where you cook half the dishes yourself. And especially again for food that would frighten most people. The next reason you might have heard of Takashi is because Anthony Bourdain went there on his NYC episode of The Layover and said that it was his favorite new restaurant in NYC after dining there. It is a Japanese and Korean barbeque mix.

The menu itself is beef and only beef, some prepared and some to enjoy in its purest form. The beef itself is selected over a period of months from sustainable farms including  local New York state farms Dickson’s Farmstand in Chelsea Market, Kansas’ Creekstone Farm courtesy of Pat Lafrieda, and Oregon’s Washugyu cows courtesy of Japanese Premium Beef. Nearly every part of the cow is served in some fashion which makes for a very exciting dining expereince.

My friends and I sat down at one of the 7 tiny tables with individual grills not really sure how far we were going to take this. Before we knew it we were ready for the craziest things on the menu and loved every minute of it.

We started off with the Niku-Uni – chuck flap topped with sea urchin and fresh wasabi. It was served on a shizo leaf and a sheet of nori which was perfect to roll up and take a bite out of. The fresh, clean presentation and flavor made this one of the best dishes of the night (Also Tony’s favorite). 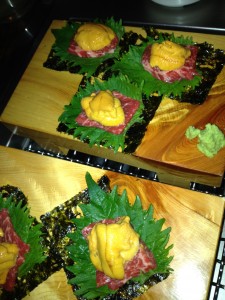 Next we had a beef tartare with a quail egg which was a nice texture and had just the right amount of seasoning. 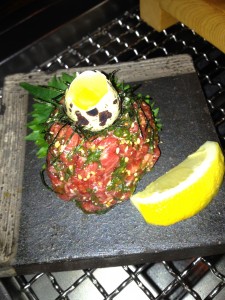 Next came the Calf’s Brain Cream (in tube) with Blinis & Caviar Russian beluga vodka shot pairing. We decided to each prepare a blini and take a bite at the same time. I have had brains before but never, ever like this. The cream was smooth and had a unique but very mild taste. The caviar was a perfect and unexpected pairing that left everyone at the table asking “is it weird that I really like brains?” 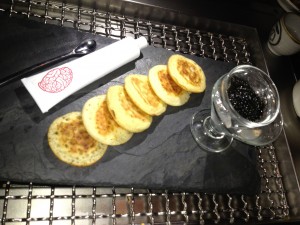 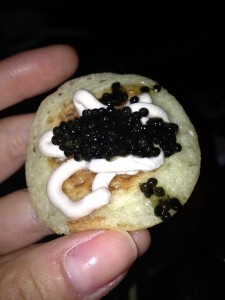 Next came the fois gras stuffed mini kobe burger with chocolate BBQ sauce. This might have been my least favorite dish of the night (although stil very tasty) because I felt that the sauce was quite overpowering and the meat and fois gras flavors got a bit lost. 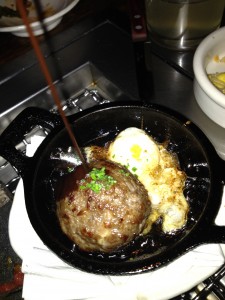 The next dish was the craziest in my mind- “Testicargot” or cow balls served escargot style with garlic shiso butter. No one really wanted to admit that they wanted the last one of these either… 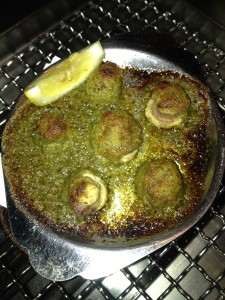 After the appetizers you select an array of meats to grill. You can choose between marinated or just served plain with sesame seeds and we tried every cut both ways. 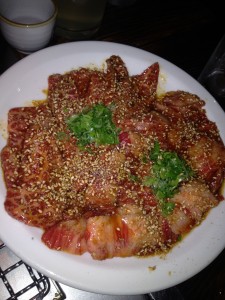 We selected the Kalbi – short rib, Rosu – Ribeye, and Shibire – sweet breads (thymus). We grabbed the tongs and got grilling. Each bite was better than the next, each meat was incredible tender and flavorful. 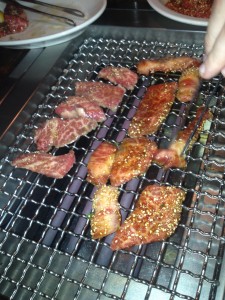 For our last dish we asked the waitress to surprise us and we had to guess what it was. She came out with a meat that was even richer and fattier than everything we had before and after thinking that we were eating one of the four stomachs, she revealed that it was the Tsurami – cheek.

Because we were celebrating two of our birthdays we of course had to get dessert. There isn’t much of an option as they only have one. We had homemade Madagascar vanilla soft serve with “the woks” which is rice flour dumplings (like the best marshmallow in the world), black sesame and soybean flour, sweet beans, green tea syrup, salted caramel and goji berry syrup. This was unlike any sundae I have every tasted. 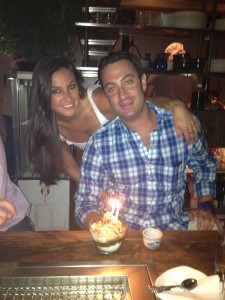 This one is making my EPIC picks for very obvious reasons. Takashi is the perfect place for an adventurous eater.

One response to “Takashi – NYC”