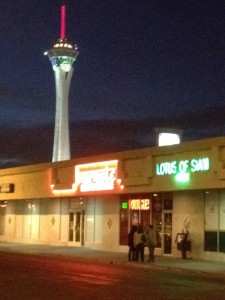 Located in the middle of a seemingly abandoned strip mall hides a true gem of a restaurant with a long history to go with it. Chef / Owner Saipin Chutima was classically trained in the art of Thai cooking beginning at the age of 5. In 1994 she opened a restaurant in Norwalk, California and after becoming a huge success decided to move toLas Vegasand expand her business.

Today, Gourmet magazine calls Lotus of Siam “the single best Thai restaurant in Northern America.” And they are not alone in their thinking as Lotus has been awarded awards of excellence for six consecutive years by Wine Spectator as well as receiving two James Beard Foundation nominations and the 2011 Best Chef: Southwest award from the Foundation.

Doors open at 5:30 pm and not a minute before but by 5:25 there was a line halfway down the sidewalk. Most people would think of that as quite the early bird special but we specifically held out for this meal and were starving by the time we were seated.

The unassuming space was renovated and expanded a few years ago and the walls are plastered with framed and autographed photos of Saipin with various local and national celebrities. The service is friendly and quick with no frills and the food is absolutely outstanding. Having been to Thailand, and specifically Chiang Mai, I can say that the dishes we sampled were as good, if not better than anything I had there.

The menu is extremely difficult to navigate with well over 130 items to choose from so we decided to ask our waiter for his opinion.

To begin we had chicken satay which was tender and juicy with a thick peanut sauce. 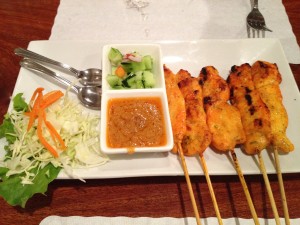 Next we had a big pot of Bankok-style soup called Tom Kah Kai made of coconut milk, sliced chicken, straw mushroom galanga, lemongrass and lime. The combination of creamy and tangy with just a touch of heat was unreal. We did not let them clear the pot for the entire meal.

Of course we had to order the traditional pad-Thai – small rice noodles stir fried with egg, green onion and bean sprouts garnished with chipped peanuts. This was easily the best pad-Thai I have had anywhere in the US. 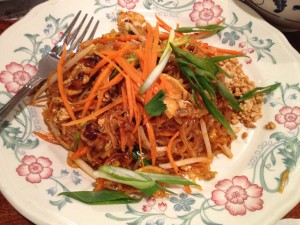 The last two dishes we ordered were on the recommendation of our waiter – nam-prik-ong (red chili dip) and fried sea bass on drunken noodles.

The red chili dip was like a Thai Bolognese – meaty with ground pork, tomato and seasoned with Thai spices and served with freshly sliced vegetables and fried pork skins. 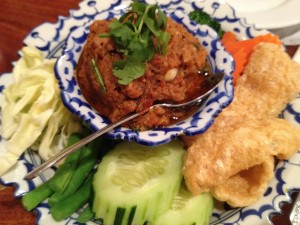 The fried sea bass was very mild in flavor and served on a bed of rice noodles with Thai basil and homemade fresh chili. 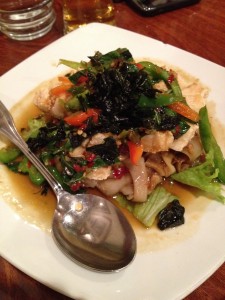 This was a memorable meal and if you are looking for a true culinary adventure while in Las Vegas, make the effort to seek out Lotus of Siam. 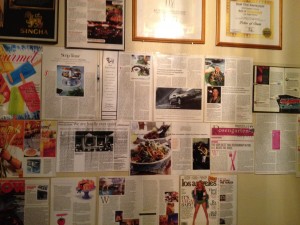