While at dinner on Friday night at Fatty Crab, the question came up right after we ordered of which are the best pork buns in NYC? I absolutely think that Fatty Crab is on the list but one friend insisted that until I had tried Ippudo, I didn’t even know what the benchmark was. We decided then and there to get to Ippudo on Sunday no matter what the wait was like. Ippudo is actually all over Japan and serves ramen dishes to thousands of customers daily but with only one location in NYC (which has been around since 1985 starting with seating for only 10 people) the waits can be longgg. We planned to go at an off time to avoid the wait.

I must admit my friend was absolutely correct. Ippudo has the most heavenly pork buns I have ever tasted. They were warmer, fluffier, sweeter and more tender but less fatty than anything I had ever had. Hence giving me reason to put it on my EPIC picks list. The rest of the meal was pretty phenomenal too. I have yet to explore many more noodle bars and Japanese “brasseries” but Ippudo sets the bar pretty damn high.

The ambiance was much more sophisticated than I expected – a mix of rustic earthy pieces and modern minimalism making it appropriate for many occasions including a late lunch. After holding out until 4pm we were quite hungry so we ordered a few other dishes as well.

To start we ordered the shishito peppers which were grilled and served with a yuzu salt and some lime. 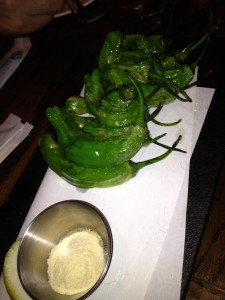 Next we had the hirata chicken wings with black pepper sauce. These may have been the crispiest wings I have ever had. They actually made a loud crackling sound when bitten into. The pepper sauce was spicy but not overkill and a sweet glaze also helped to tone down the heat. There are only 3 pieces per order so you may need more! 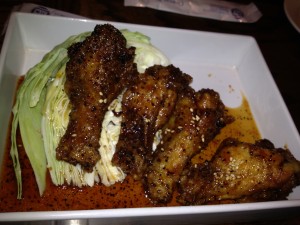 The pork buns, as I described before, were simply perfection. Ippudo serves all their varieties of buns with a signature spicy bun sauce. 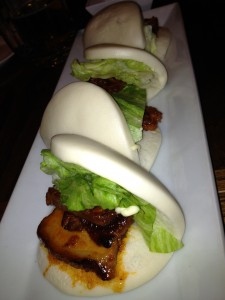 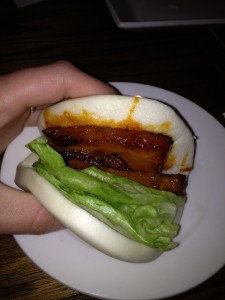 Lastly, One cannot eat at Ippudo without having a ramen dish. I ordered the akamaru modern which was the original silky “Tonkotsu” (pork) soup noodles topped with Ippudo’s secret “Umami Dama” miso paste, pork chashu, cabage, sesame kikurage mushrooms, scallions, and fragrant garlic oil. The broth was incredibly light but the flavors were so complex and delicious I had both the chopsticks and soup spoon going simultaneously. A few slices of pork added some super tender protein and a little richness. 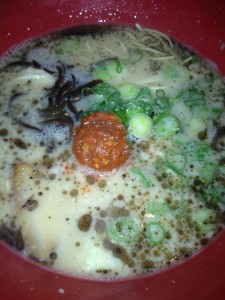 Ippudo is an incredibly satisfying restaurant that is low key enough for an anytime meal but also nice enough for a date. I would recommend to go at off times and with enough time afterwards to enjoy the inevitable food coma. 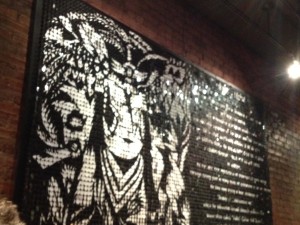 This cool piece of art was made entirely of dangling sequins.