Dieci is a very unusual concept when it comes to genre- it is Japanese and Italian. The recommendation came from my friend Emily, who’s birthday we were celebrating, via a very reliable source- Joe Bastianich- after sitting next to him at a bar recently (thanks Joe!)

This shoe-box sized eatery might be one of the East Villages best kept secrets. Almost everything about Dieci is actually Japanese from the architect, to the owner, to the chef but their flair comes from the infusion of Italian ingredients.

We started with a few appetizers to share. First came the brussels sprouts which have become the ubiquitous vegetable of choice on the restaurant scene. Rather than your traditional preparation tossed with bacon this one definitely had a little feng shui going on. The sprouts came arranged in a perfect circle with a thin veil of melted parmesan draped neatly over the top.

The next dish was one that everyone ordered – the scrambled egg with uni and caviar. The soft, evenly cooked eggs were covered in a glossy clear sauce almost like a gelatin and then topped with just enough roe and caviar to have some in each spoonful.

We also had a buffalo mozzarella with uni and yuzu. This was an incredible combination of creamy cheese and roe with the sweet tanginess of the yuzu to make it really interesting.

The fois gras chawanmushi was so silky that is made a normally rich and heavy ingredient as light as a cloud. Somehow this tiny little cup stayed piping hot until the very last bite. 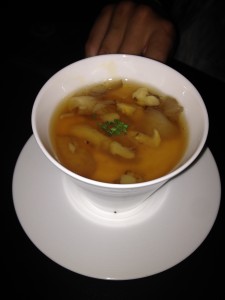 The Berkshire pork belly buns were so delicious that silence fell over the table once we took a bite. They immediately induced the instinct to hoard and not let anyone else know of this insane discovery. I must say that these might even overtake the buns at Ippudo-  a bit meatier with a slightly fluffier bun. 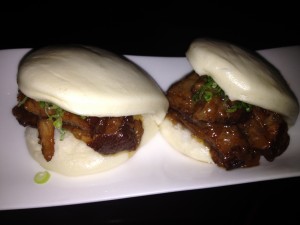 Emily and I wanted a Japanese and an Italian entree so we chose the Salmon and ikura don and the spicy lamb bolognese ramen which is one of their signature dishes. The salmon was incredibly fresh and arranged on an expertly prepared mound of sushi rice. To complete the little volcano was a generous amount of salmon roe nestled into the crater. 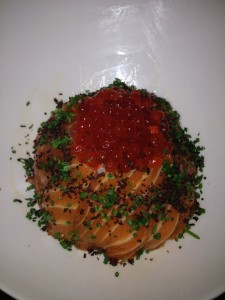 The lamb bolognese ramen was a damn good bowl of pasta. Just spicy enough to give it a little kick but not too much so that it overpowered the lamb flavor. The ramen noodles worked very nicely and actually held the thick sauce better than a normal angel hair or linguine. 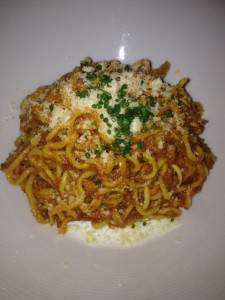 The others ordered the fettucine with uni. In my experience, there is no such thing as too much uni. Ever. 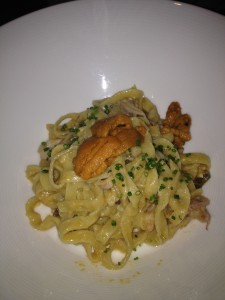 After such a rich meal all we needed was something to put a birthday candle in so we went for the warm chocolate cake which was served in a little dish to hold in the gooiness. 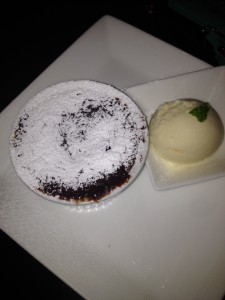 Dieci is a wonderful place for an original meal that will surely impress anyone you bring there.