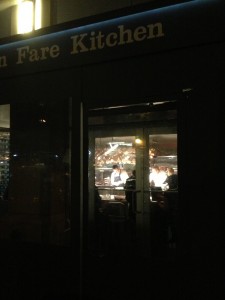 Looking in on the warm, cozy kitchen

Brooklyn Fare easily ranks in my top 3 meals of all time.  The brilliant chef César Ramirez’s eighteen-seat tasting restaurant is extremely unique for several reasons. First, it is Brooklyn’s only three Michelin-starred restaurant. Second, it is located in a grocery store. Third, it takes the extremely high end dining experience and puts it in the kitchen. The whole restaurant is basically a big stainless steel (boarderline medical looking) arced table with a counter for plating and a small range in the back. Above the counter floats a large cloud of copper pots in every size.

You do pay a hefty price for this unique experience – $225 per person excluding any wine (which starts at $60 per bottle or $195 for the wine pairings which is 6 pours which we chose to do) – but this has not deterred thousands of guests from adding their name to the 2+ month long waitlist.

One of the most interesting things about the meal is that you barely see any actual cooking going on. I half expected flames and smoke and mincing of rare heirloom microherbs  but everything is about the preparation at Brooklyn Fare. The entire display is about plating and layering of flavors onto each dish. A spoonful of caviar here, a drizzle of infused oil there. Amazingly, we were never served on the same set of china twice. While all of the plateware was bright white to highlight the food rather than the serving vehicle, the shapes were certainly very creative.

On any given night the menu could range from 20 – 26 courses each of which are small enough to keep you from feeling extremely overwhelmed around #12.  My friends and I still decided to eat light throughout the day just in case. Sadly for me, as photos are not permitted during the meal, I was unable to capture any of the beautiful presentations.

The Chef at Work. Photo courtesy of www.tastingtable.com

To begin we were served a tiny glass of the most delicious sip of squash soup I have ever tasted. It was velvety smooth and had a very concentrated flavor of ripe winter squash and was complemented by a creamy yogurt on top. The next 10 or so dishes were all served sashimi style and featured interesting fish such as Knifejaw, Blue Nose and Red Trumpet Fish. Each of the perfectly fileted selections was dressed by a combination of sauces and herbs that highlighted the unique flavors of the fish. We also had some more well known varieties such as a little filo cup filled with fresh Salmon and its roe decorated by a tiny edible purple bud. My favorite dish in this section had to be the sea urchin roe which was piled on top of a buttery brioche round and capped with a gorgeous slice of glazed black truffle.

After the sashimi courses came some cooked dishes which included a brilliant uni custard with caviar,  incredible burgundy snails in silky garlic cream and of course what über lengthy tasting menu would be complete without a seared fois gras? Our main protein for the evening (surprisingly the only non seafood protein we had at all ex-fois gras) was a seared duck. The duck was perfectly medium rare with super crispy skin. This was paired with a delicious deep Gevrey-Chambertin (pinot noir) to complement.

To top off our meal we had several dessert courses of which the most interesting might have been the giant brick of aerated chocolate yogurt (similar concept to a cotton candy). The chef told us he would explain it to us after we ate it because it would be gone in about 35 seconds. Eating this airy brick was almost like eating a block of cold chocolate air – the flavor was there but there wasn’t really much to bite onto.

After a three and a half hour meal we were still having so much fun that we were the last to leave. Chef Cesar was kind enough to come talk to us throughout the meal and at the end take one glamour shot with our group.

Lucky for us, Brooklyn Fare has plans to open an NYC outpost and I fully expect to be invited to the opening! And you can bet that I will do everything I can to make this an annual event.

Chef Cesar and the Ladies