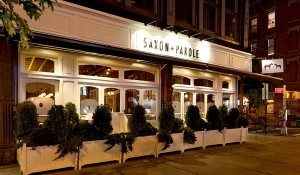 In the old Double Crown space has emerged a new restaurant- Saxon & Parole. Amazingly, this restaurant was able to revamp itself and reopen before most people even noticed that it had closed in the first place. I actually really enjoyed Double Crown but my recent meal at Saxon & Parole was also very good. Chef Brad Farmerie has fairly basic dishes on the menu that are spiced up in unexpected ways.

The interior is very similar to the old space although now covered in lighter colored wood, white-washed brick and accented with equestrian themed items. It actually feels a bit like you are walking into a barn out in the country. A surreal feeling coming off of bustling Bleeker street.

There was some slight confusion with our table because there were four of us seated at a table ideally set for three. We happily managed to squeeze and it didn’t really affect our meal in any way. Our server was also very friendly and helpful, not overbearing and had a charming British accent (always a plus).

We were starving when we sat down so welcomed a nice board of warm bread. I always appreciate when a restaurant puts in the extra effort to spice up the bread in some way. These home made mini sourdough rolls were light and airy served with both a salted butter and a fois gras butter. 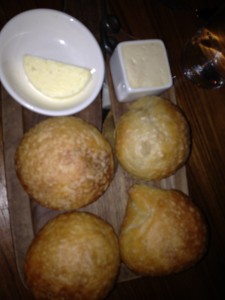 The first was an amazing Brussels sprouts dish- Brussels sprout leaves with a poached egg, toasted hazelnuts, maple bacon lardons, and truffle-yuzu hollandaise. We probably finished this before the plate had even hit the table and all of us were licking our forks. With every ingredient in perfect proportion- creamy egg, tangy yuzu, smokey truffle, salty bacon, earthy hazelnuts- this is a must order. 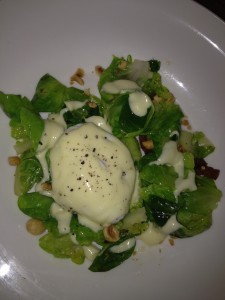 We also had the hand-cut salmon tartare with fried capers, roasted peppers, soft-boiled quail egg. I must admit that I loved this despite the roasted peppers (there weren’t that many of themand they could barely be tasted). The thickly cut tartare was fresh and had a good texture, the fried capers added a bit of salty seasoning and the quail egg a touch of creaminess. 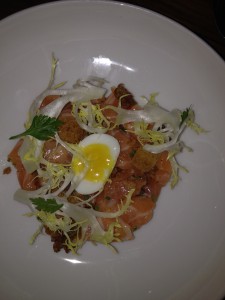 Our more decadent appetizer was the foie gras with kumquat and mustard seed marmalade served with toasted brioche. The brioche was so fresh and delicious that the butter could be tasted in every bite. And what is better than fois gras plus butter? I loved the accompaniment of the kumquat. These little spunky fruits are making appearances on more menus lately and I am all for it. They have a very unique citrus flavor about them and a bit of the tartness contrasted nicely with the rich fois. 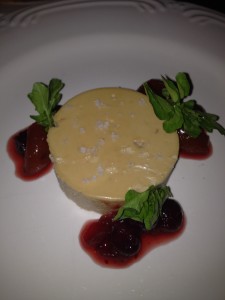 We shared two mains as a group – the big Guinness and five spice glazed short rib made a grand entrance on our table first. The massive piece of tender meat was served bone-in with a few large objects that at first appeared to be bone marrow but were actually turnips which was probably for the better. A few bites of the rich tender beef were enough for me and then it was over to the fish. 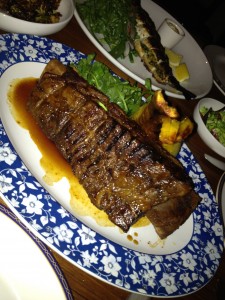 The whole roasted branzino stuffed with parmesan, toasted panko bread crumbs, smoked paprika was deboned and then presented as a whole fish. This was very nicely done and the tartar sauce was a nice pairing but it was the least popular of all our dishes so far. 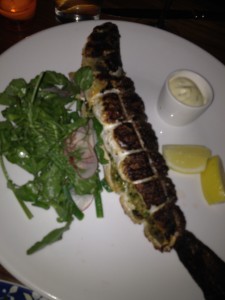 On the side we ordered the cauliflower and gruyère gratin which was well executed in the traditional way. The sautéed edamame with sun-dried tomatoes and feta cheese was surprisingly good as I expected it to be a little bland. Lastly the crispy Brussels sprouts in chili-caramel. Ok, so we double-dipped in the Brussels sprout department. In our defense though, shared four ways two Brussels dishes wasn’t that much. And they were so different! This version was sweet and crispy, served almost burned. Also very good. 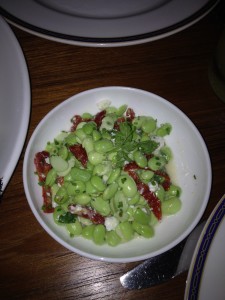 For dessert we wanted something light to go with our espresso so we were easily coerced into waiting the additional 15 minutes necessary for the kitchen to whip up a chocolate soufflé. Beautifully crispy on top and airy and melty on the inside. The whisky ice cream was a nice touch on the side. 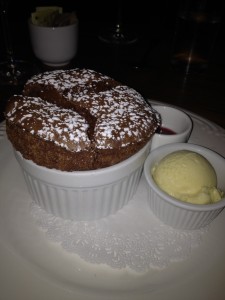 Saxon & Parole is a great place to go with a group or on a date. If all goes well on your date, head on through the secret door to the tiny British-colonial themed Madame Geneva for one of their signature gin cocktails with homemade marmelade.