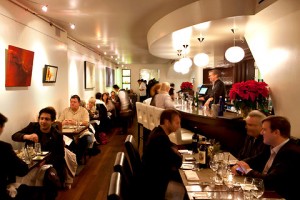 Photo courtesy of Michael Falco for The New York Times

When I am planning a nice meal out with friends I don’t generally crave Austrian food. Nor do I generally try to plan something in midtown. Seäsonal, however, which holds a Michelin star has been on my list for a few years now and I finally had an appropriate evening to plan a dinner there. The experience did not disappoint. While the atmosphere is a bit austere, as one might expect from a fine Austrian or a German establishment, and the crowd is skewed to the older side, the overall feel is serene, refined and clean. The food is presented in a similar way on large elegant white dishes highlighting the thoughtfulness of the presentation and the delicateness of the flavors. Many of the dishes at Seäsonal are deconstructed and incorporate interesting ingredients which made the meal somewhat adventurous.

Upon entering I was lucky enough to meet one of the two chefs- Wolfgang Ban who is partners with Eduard Frauneder. As I waited for my friends to arrive I sipped some wine as he walked me through the menu in detail and everything sounded amazing. In addition to an a la carte menu there is also a chefs’ tasting menu and a seasonal menu. We opted for the seasonal tasting menu which was seven courses.

Each table had a small flower arrangement that reminded me of a Monet – big leaves and pastel tulips. 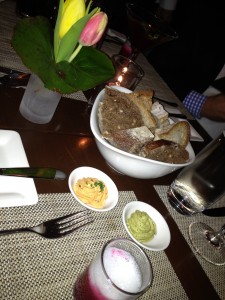 To start we were served several beautifully arranged objects over which was poured a light chicken consommé to create a potato soup. The broth and the whipped potato became the base with bits of speck and chives and in the center was a cube shaped leek ravioli which was slightly sweet on the inside. All the flavors you would want in the best baked potato ever but in a soup. 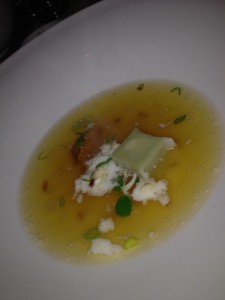 The second course was a gorgeous Japanese scallop crudo which was propped up above a cloud of potato mousse by two perfectly cylindrical columns of potato. It was then topped off with a bright green taragon oil. 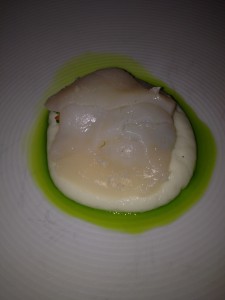 It seemed that each dish of the meal was somehow better than the last. We were next served a soft poached egg with chunks of lobster, meaty hen of the woods mushrooms all surrounded a pumpernickel crumble that was a bit salty and seasoned the dish.

The next dish was glazed pork belly with endive and cornbread. The pork was glazed with a sweet mustard seed sauce and it was very tender and juicy. My only critique on this dish was that although it was not intended to be a crispy dish, I prefer the skin to be rendered and have some bite to it. 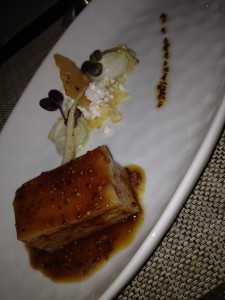 Of course one cannot go to an Austrian restaurant without sampling their wiener schnitzel. The chef was nice enough to incorporate the dish into our tasting menu so that we wouldn’t have to share one plate 5 ways as we had originally intended on ordering. This rendition was executed very well – a tender, finely pounded veal in an airy crispy crust and a lingonberry sauce. The two side dishes were surprisingly tasty as well- a traditional potato salad with a tangy sauce and a pickled cucumber that was shredded into extra-fine noodles and then rolled neatly into a quenelle. 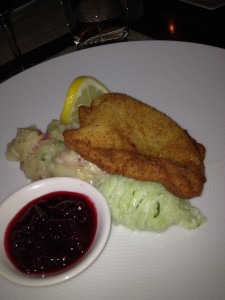 The last of our mains was crescent duck with red cabbage, kohlrabi and poppyseed. Duck has a tendency to be quite tough unless prepared properly. This was the most tender duck I have ever had cooked to a precise medium rare. The kohlrabi on the side was tender and lightly flavored by the poppy seed sauce. My one critique here is the same as before- the skin could have been rendered a bit more so the it created a more texture on the meat.

This was one of the most creative desserts I have had in a very, very long time. The flavors were so original and delicious I wanted a refill immediately. A scoop of pear ice cream was surrounded by two different powders which turned out to be fig and chocolate. The waiter then came over and poured a thick creamy eggnog which tasted a bit like coconut over the entire thing to create the most decadent dessert soup. 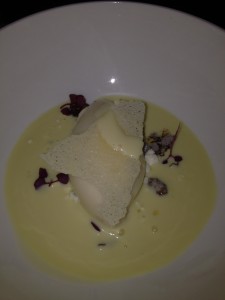