Totto Ramen is one of the most talked about ramen spots when it comes to determining who wears the crown for best ramen in the city. Ramen noodles seemed like a bit of a trend to me when I first moved here over five years ago. Apparently, Ramen is here to stay which can clearly seen by the multi-hour-long lines of people waiting to slurp some of the best noodles at the likes of Ippudo, Totto Ramen and newcomer Ivan Ramen at Gotham West. As a huge fan of Ippudo I decided to see if Totto was as good as everyone says it is.

The brutal cold of the recent “Polar Vortex” made me want nothing but steaming hot bowls of soup for days. On day 2 of the frigid weather I ventured uptown to get my hands on some of the delectable noodles.

For whatever reason, Totto chose to open their second location just a few blocks away from the original. My friend and I decided to try the new location and lucky for us the bitterly cold night worked in our favor as we walked right in and immediately sat down. The space is still fairly small like the original but we were finished with our entire meal in about 20 minutes so you do not have to be concerned about the turnaround time once you are seated.

The menu is fairly small with just five options of soup and some sides. I felt compelled to order the Totto Spicy Ramen because the waitress said it was the most popular version. It features their original rayu (chili-infused oil), spicy sesame oil and is topped with scallion, char siu pork, bean sprouts and nori.

The soup arrived nearly minutes later looking hot and gorgeous. After a few bites I realized that I wasn’t the biggest fan of the spicy sauces. While I do like heat, I didn’t like the flavor of one of the pastes, which tasted like burnt garlic to me. I also thought the pork was chewy compared to the soft, tender pieces in Ippudo’s soup. The noodles were a good springy texture. 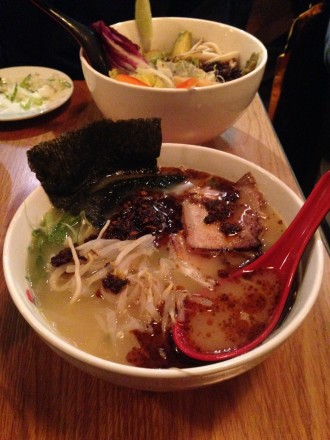 My friend had the vegetable ramen which I also thought was just ok especially compared to a meat broth.

On the side we had the broiled char siu mayo don which was a dish of pork slices with yuzu mayo on top of rice with some scallions. This was very tasty as yuzu mayo can probably make anything taste good. Again, however, the pork was slightly tough and made me long for an Ippudo pork bun. 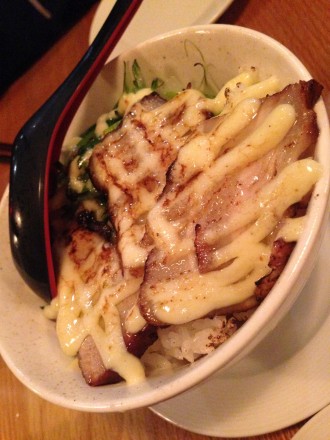 The other side was a special of the night – fried chicken with a sweet chili sauce. These were basically just delicious chicken fingers but I couldn’t really complain there. 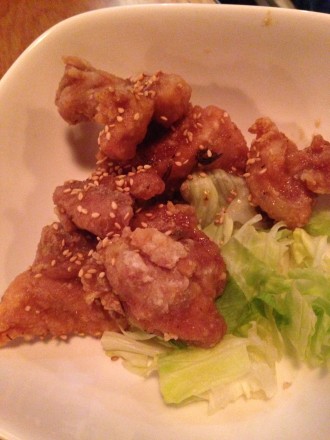 In my mind, Totto cannot even come close to touching Ippudo as the reigning Ramen kings. However, Totto is still a great meal and should certainly be considered at the top in the ramen world of NYC.