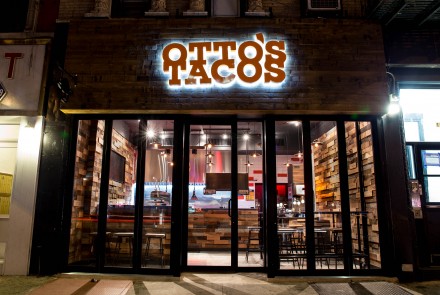 Otto’s Tacos is the hottest new taco shack in town. There has been a huge amount of hype over this joint and I hate to be the bearer of bad news but I have to disagree with all of this effusively positive feedback. Sure they make a decent taco, but is it as life-changing as everyone says? Absolutely not.

Otto’s is California-inspired and located in the East Village with enough seats for about 10 people. Mostly it is meant for take out or invites you to down your taco and get out the way. The first thing you see when you walk in is the tortilla press that makes both the tortillas for the tacos and the thicker dough for the masa fries. The menu is very limited so that they can focus on the freshness of the ingredients.

My Mexican food enthusiast dining partner and I ordered up a nice sampling of the menu – carne asada, carnitas, mushroom and two chicken tacos along with a side of chips and guacamole and the masa fries. 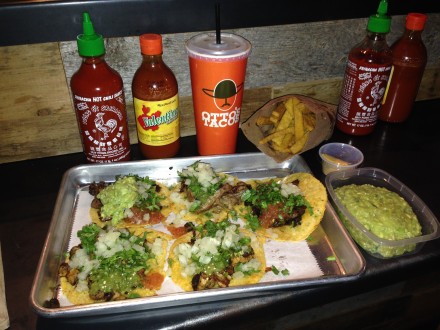 I’m all for simplicity but when all the tacos are basically dressed the same way (chopped onion, cilantro, maybe a little something else and the option of guacamole) I feel like I could do almost as good a job at home. I preferred the carnitas to the others because it was meaty with a little fat and had the most balanced flavor. The carne asada was chewy and tough and way over seasoned. The chicken and mushroom versions were just fine.

The masa fries were ok by themselves, they had a good flavor of hot, fried saltiness but had an almost stale texture to them like an overly thick tortilla. What really saved them was the delicious chipotle mayo dipping sauce.

Another disappointment is the guacamole which they make in advance. It is definitely lacking in the flavor department and way over mixed. It comes in an impersonal, pre-packaged container that almost could have said “Costco” and I would have believed it. It was elevated only by the fantastically light corn tortilla chips that also came fresh out of the fryer. I probably could have eaten 10 batches of those if given the chance.

Another positive is that Otto’s is probably one of the most reasonably priced eateries in the city. With no item on the menu over $3.50. In the most expensive city in the country that is certainly refreshing to see.

One response to “Otto’s Tacos – NYC”