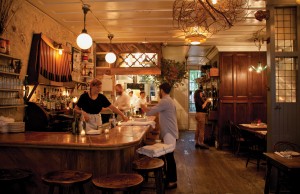 Spring and summer are the prefect seasons for notoriously unadventurous Manhattanites to visit the other boroughs. Those of us who are afraid to leave the island feel much safer during the warmer months because we don’t run the risk of freezing to death if we get lost and can’t find a cab or the subway. Over the past few months I have begun to overcome my fears of venturing too far away from my usual stomping grounds and realize just how manageable Brooklyn can be.

A close friend of mine who is also making an effort to spend more time in BK made a reservation at Vinegar Hill House and invited me to come along with a few other friends. Great idea. So I donned my very best chambray shirt and jeans look and made my way across the river.

On a quiet little street in Vinegar Hill is this tiny super low key restaurant. There is no real rhyme or reason to the décor except that nothing really matches. It is almost as if someone went to their grandmothers house and collected a bunch of potted plants stuff from her attic and then arranged it in an alley with some tables and chairs scattered in between. The chandelier is reminiscent of a tumbleweed

The story behind the restaurant is quite romantic. The couple that opened the restaurant, Jean Adamson and Sam Buffa, first met when they worked together at Freeman’s on the Lower East Side and then left to open this even more low key and quirky space.

The menu is very small and changes all the time. We decided to order a couple of things to share. For the table we had fried oysters. These were the largest oysters I have ever seen – one was actually the size of my hand. The meatiness of the mollusk nicely balanced out the crispy outer crust. 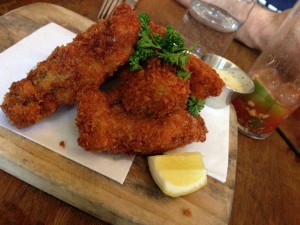 We also had the eggs benedict with smoked trout. I personally like smoked fish so thought this was an interesting interpretation of your taditional eggs benedict but might not be for everyone. 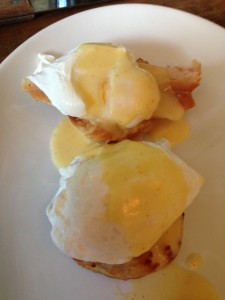 One of my friends ordered the special french dip which was served on crusty fresh bread. 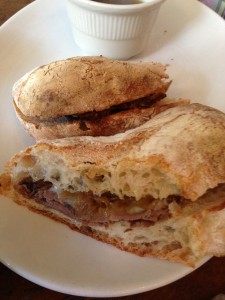 For the dessert portion of the entrée (because you can do that at brunch) we ordered the pear pancake which was cooked in a cast iron skillet in their wood burning oven. It was not so much a pancake as a pillowey fritatta-like dutch baby with big slices of ripe pear floating in a pool of warm maple syrup. The only way to know is to try it yourself. 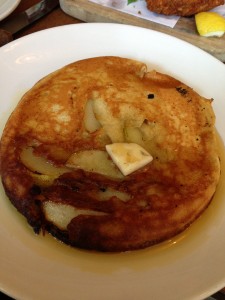