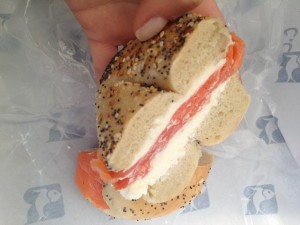 I am probably going to anger a lot of people with this post but I just have to say it – I really wasn’t that impressed with Russ & Daughters bagel with salmon. It is nearly impossible to be a New Yorker and dislike bagels which means that there is a lot of debate on this issue. A bagel is such a simple food so how can it really be good or bad? There are a few key criteria that factor into the success of a bagel.

A good bagel really should not need to be toasted. It is fine if you prefer your bagel toasted but it should not be necessary in order to make it edible. This bagel was fine untoasted but I almost would have preferred if it were.

A good bagel should have a nice outer crust with a fluffy tender inside. A “bready” bagel is not a good sign. If it is somewhat shiny on the outside then you probably have a good candidate. This bagel was a little bready in my opinion and a little too soft on the outside.

A good bagel should have the right amount of seasoning. I prefer everything bagels and my friend and I joked that this was more of a “something” bagel with a few stray poppy and sesame seeds stuck to the bottom. 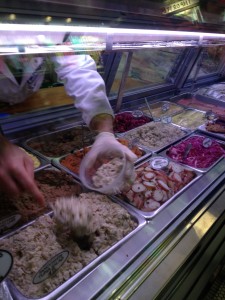 Don’t get me wrong, Russ & Daughters was really good. It has been in existence since 1914 so clearly they have developed a solid fan base. What they do do very well is the accoutrements- various light, fluffy cream cheeses, spreads, nova, lox, etc. They have anything you could possibly ask for from a traditional Jewish deli. All of the varieties of salmon are masterfully sliced to order.

I would definitely go back but I am not sure that I would make the trek across town to go there like I would for one or two other places. Check out Russ & Daughters and be your own judge. 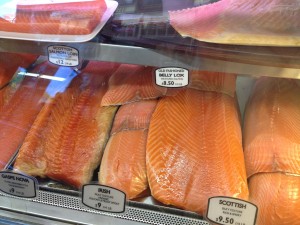 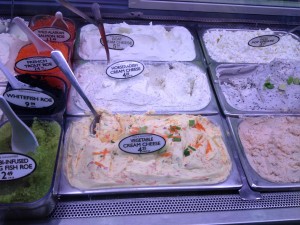