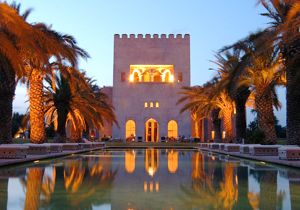 The Ksar Char-Bagh is a tiny hotel in the Palmeraie and belongs to the Relais & Châteaux collection. With only 13 rooms on an awe inspiring property, it is easy to feel like royalty here. We had a very late reservation for dinner and the kitchen was kind enough to stay open late for just the three of us. Even better, the chef, Hadrien Villedieu, who worked under the likes of Vigato, Robuchon and Passard, came out to chat with us twice which made it all the more pleasurable and interesting. Our absolute best meal of the trip was at the Hotel Ksar Char-Bagh. I must say that this type of experience may not be for everyone but I thought it was a truly incredible one. This is not a sceney spot but rather a truly luxurious and private experience. 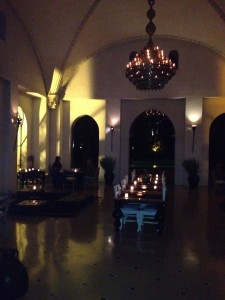 We were seated at a gorgeous little table on the side of the room overlooking the pool and some warmly lit royal palms. Out came a few amuse bouche which is always a fun part of the meal. Everything served at the restaurant is local and as fresh as possible. The first taste we were given was a plate of little shiny tomatoes around a stack of blini-like pancakes. We each grabbed a tomato and popped it in our mouth to discover that it was candy-coated in rosemary sugar. The burst was sweet and herbacious. Each little pancake turned out to be a cheesy biscuit. An amazing combination.

Next we were served a little palate cleanser of melon soup. A refreshing little sip.

We were also served some freshly baked bread that was still steaming when it reached the table. The neatly arranged little poufs came in two varieties – French and a seasoned roll. 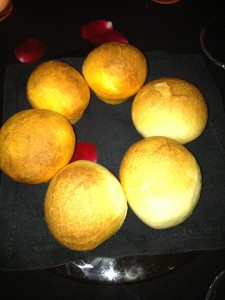 As my appetizer I had a gorgeous medley of cooked and raw vegetables artistically arranged on the plate. A real natural work of art. The variety of textures made the dish even more interesting with some crisp bites followed by some buttery soft ones. 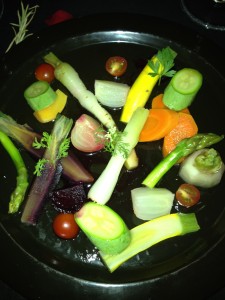 My friends had two different dishes which were also incredible. One was a fois gras two ways – a mousse that was served like a crème brûlée with a ginger sugar crust and the other was a traditional pâté terrine. This was incredibly rich as you can imagine but the spicy ginger sugar complemented nicely.

The other appetizer was a scallop carpaccio that was somewhat asian inspired with a sort of sesame teriyaki-soy seasoning. Garnished with some micro greens this was a much lighter plate. 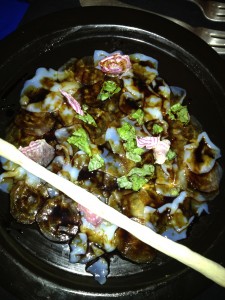 As my entrée I decided to have the lamb from Meknès which is a city in Northern Morocco. It was so tender and literally fell apart before you could cut it. The sauce was a reduction of the cooking juices and was a mix between French traditional cuisine with a few hints of Moroccan spices. The lamb was served with another artfully arranged arrangement of vegetables.

We were so full after the main course that we decided to share a dessert (or two). The raspberry souffle was the perfect choice because it was so light. When the souffle came out the waiter poked a hole in the center for a small scoop of raspberry sorbet which quickly became the sauce. 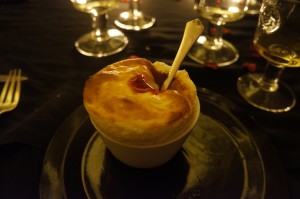 The warm chocolate cake was the perfect size to split into 3 melty chocolate bites. 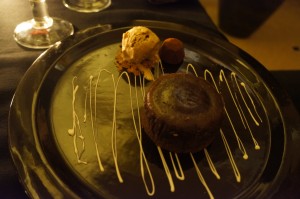 I would absolutely recommend the Ksar Char-Bagh for a traveller who is looking for a luxurious and romantic experience. This is a perfect getaway from the crowds of the city with top notch food. This one makes my EPIC picks list.