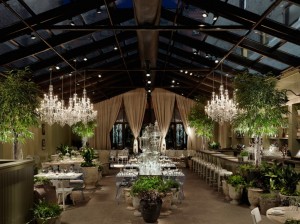 Located in the trendy Mondrian Hotel in Soho Imperial No. Nine is like a British garden oasis in the middle of the city. The Morgans Hotel Group developed this beautiful hotel with the sophisticated restraint of Philippe Starck and opened just about a year ago. Besides being located in a major haute-hotel chain, Imperial No. Nine got a lot of buzz about head chef and Top Chef star Sam Talbot (who has since departed for the Surf Lodge in Montauk, NY).

On an overcast day in November, a few friends and I decided to go for brunch. We were seated in the garden room which, I have read, is infinitely nicer than the main dining area. The décor is beautiful and you feel as if you are walking into an upscale greenhouse with ferns and pots strewn amongst chandeliers and comfy benches.

Every good brunch begins with a towering plate of seafood right? Well, maybe not but it’s definitely something I have come to appreciate. With five people at our table we thought it would only be appropriate to order the largest assortment on the menu. 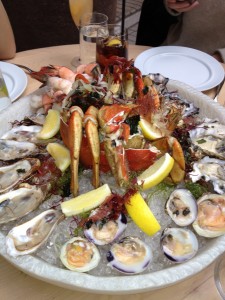 We decided to get the scuffin and scone because none of us had ever had a “scuffin” before. Allegedly, this so called scuffin is a mixture between a scone and a muffin. Hmm. It turned out to be a decent pastry but don’t know if it really deserves a whole new category of baked good on its own. 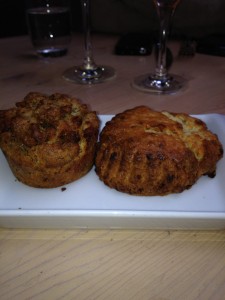 I have to throw in my comment about the service here because they seemed a bit disorganized in the back. A different server attempted to bring us our second course multiple times before we had finished our first course. Considering there are not a huge number of tables, this seemed a little sloppy.

As you probably already know, I like my burgers medium rare and the No. Nine Burger came a bit more well-done than I like but many other factors allowed me to overlook this mishap. The accoutrements included crispy bacon, cornichons, chihuahua cheese with a tangy kale salad all topped with fried hen egg. I will be giving this one a second chance for sure. 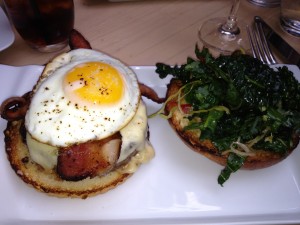 I regrettably had already signed away half my burger before it arrived but the trade ended up being worth it. The butter poached lobster roll with celery salt and crispy shallot was delicious and brought me right back to the beach.

Although I did not order the bananas foster pancakes myself I had to sneak a little taste. These go up there with some of the best pancakes I have ever had. They came to the table super hot and browned topped with soft caramelized bananas and a hot rum maple syrup. 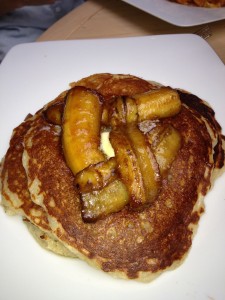 We topped everything of with two decadent desserts – a bread pudding and an apple crisp. The pudding was banana bread pudding (because we didn’t get quite enough with just a taste of the pancakes) with a honeycomb semifreddo and a dash of chocolate-hazelnut spread. 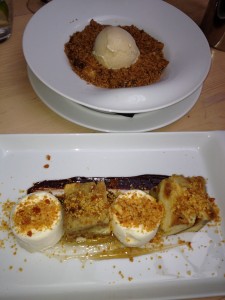 Overall, Imperial No. Nine is a glamorous restaurant for a group brunch or for a romantic dinner for two. Just make sure you request the garden room!